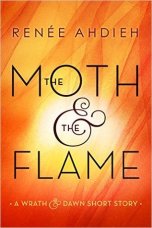 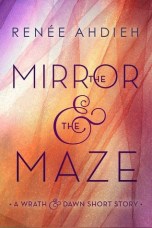 “A girl willingly donning a crown of death. A small girl with Immense courage.”
- The Crown and the Arrow – 82%

It started as playful, if barbed, banter before rising to a fateful wager with a most notorious rake—the Captain of the Guard, Jalal al-Khoury—who may have finally met his match in a lovely, if haughty, handmaiden, Despina. But she, too, seems to have met her match in the handsome Jalal. What begins as a tempestuous battle of will and wit in short order becomes a passionate affair spurred on by tragedy of the worst kind..

I liked seeing what was between Jalal and Despina develop. We just have to guess in The Wrath and the Dawn what was between them and knowing is far more satisfying – at least in this case. Finding out how and when it all fit into the main story was great too.
I love reading about back stories in novellas, they add to the characters in a way that’s often missed out of the main books because it adds little to the overall plot. Meeting Ana, however briefly, was enlightening too – she’s so different to Shari, which is perhaps telling.
I’m glad Despina’s assumptions seem wrong and I hope their sub plot storyline works out for them!

Seventy-one days and seventy-one nights had come and gone since Khalid began killing his brides. This dawn, Khalid would mark the loss of the seventy-second girl, Shahrzad al-Khayzuran. Khalid didn’t know how many more of these dawns he could take. And there was something about this latest girl that piqued his interest. Not only had she volunteered to marry him, but at their wedding ceremony, she had seemed not the least bit afraid. In fact, what he had seen in her eyes was nothing short of pure hatred. She was about to lose her life. Why wasn’t she afraid? Why did she hate him so? He had never before gone to his wife’s chambers before her death at dawn. Tonight would be different

Khalid has a lot of self hate – not that we see too much of it in The Wrath and the Dawn, beyond hints and the occasional reference – this novella gives us an extensive depth and breadth assessment of the whats and why-fores. It’s also interesting to see exactly why it is he hesitates when it comes to killing Shazi – a very interesting reason and not one you’d think. I thought it was a different and unique reason, which gives us quite a big insight into Khalid himself.
While I don’t agree with his self hate, knowing where it comes from and seeing why he believes in it is sad. Pretty sure if I were in his shoes I’d feel the same. Though, I might have chosen to act differently.
This book also references Shazi as being small which was not something I picked up on in The Wrath and the Dawn if it was indeed mentioned.

The city of Rey is burning. With smoke billowing, fires blazing and his people fleeing, Khalid races back to defend his city, and protect his queen. But Khalid is too late to do either. He and his men arrive to find the city in ruins, nothing but a maze of destruction, and Shahrzad is gone. But who could have wrought such devastation? Khalid fears he may already know the answer, the price of choosing love over the people of Rey all too evident.

To be honest I skipped most of this novella – it’s describing Khalid’s reaction to the destruction of Rey, which is pretty important, but I was desperate to read about the people not the place! When I got to the important people, it was pretty much a case of Jalal explaining the decision he made at the end of The Wrath and the Dawn.

These novellas should be read after book one. After book two if you so choose as well. But even though there’s a 0.2 and a 0.5, you wont care much about the characters until you’ve read The Wrath and the Dawn.