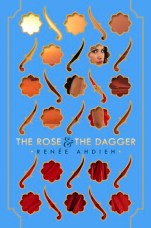 “For a prisoner can never be a Calipha.
But a Calipha is only a prisoner if she chooses to be.”
- page 309

The much anticipated sequel to the breathtaking The Wrath and the Dawn, lauded by Publishers Weekly as “a potent page-turner of intrigue and romance.”

I am surrounded on all sides by a desert. A guest, in a prison of sand and sun. My family is here. And I do not know whom I can trust.

In a land on the brink of war, Shahrzad has been torn from the love of her husband Khalid, the Caliph of Khorasan. She once believed him a monster, but his secrets revealed a man tormented by guilt and a powerful curse—one that might keep them apart forever. Reunited with her family, who have taken refuge with enemies of Khalid, and Tariq, her childhood sweetheart, she should be happy. But Tariq now commands forces set on destroying Khalid’s empire. Shahrzad is almost a prisoner caught between loyalties to people she loves. But she refuses to be a pawn and devises a plan.

While her father, Jahandar, continues to play with magical forces he doesn’t yet understand, Shahrzad tries to uncover powers that may lie dormant within her. With the help of a tattered old carpet and a tempestuous but sage young man, Shahrzad will attempt to break the curse and reunite with her one true love.

THIS!!!!
This is how to write a love triangle and a separation, if indeed you need to write one at all. This is also how to write a love story!
I don’t want to give too much away, but if you’ve read a review or two of mine, you’ll know how I feel about love triangles and separations and what I think really should happen instead. ( 1.Dislike, 2. Dislike, 2. Stick together and help each other.) While I’ve recently found myself enjoying such painful series as The Greatcoats by Sebastien De Castell and The Winners’ Trilogy by Marie Rutkoski, this is the kind of thing I’ve been looking for.

I think the person who has the least growth within this storyline is perhaps Shahrzad. She was more of a catalyst and it really works. I’m not even annoyed that she sort of spent time hanging around waiting to be rescued. She was in pretty hopeless situations and she’s from a culture and a time when women were basically just pretty. She was also, by all accounts a pretty tiny young woman and if she had been able to take down swaths of soldiers it would have been silly. Especially with little training. It’s perhaps because of her attitude while waiting around that contributed to my feelings about this. ( see my chosen quote above)

Khalid was certainly my favourite character, he goes through so much and yet he doesn’t follow in the personality footsteps of his father or his uncle. In believing he doesn’t deserve what he has, he deserves it all the more. His reactions in all the situations that could have gone so wrong were so perfect. Tariq grew on me too, when he grew up and faced the truth. The fact that he actually did was a big step and it was only a little too late, but I think that’s part of why he changed so much. Some love needs to go to Shari too though, for when she was told of a promise made, she did not sulk about it, but honoured it and that sounds like nothing, but I’ve read stories where that sort of thing was scorned and pouted about and, though I know it’s possible, I just don’t understand how people can be that way.

Now, I have to admit, as soon as I picked the book up I checked the end, so any curves or shocks didn’t really work on me, in fact I didn’t really consider them until I was sent a warning! (Which I received after I actually finished reading the book and I logged on to start this review.) Generally I try not to do this, but this series seemed to be shaping up pretty fantastically, so I had to make sure things were going to work well to the end. While the ending may not be to everyone’s liking, it’s how they got there that I loved the most.

Though it has little relation, I’ve found this series has called to mind the Tricksters series by Tamora Pierce (or as it seems to be on Goodreads “Daughter of the Lioness duology) and I’m not completely sure why. The setting is different, the characters are different, even the setting is different! But I’d recommend those books too.
I could have stood for a little more at the end of the story. How was their return received? Were the letters ever sent? Explanations given? What? Also more of Omar and his wife please. Or, just this world in general….

I certainly loved this series and I’d recommend it to anyone who enjoys – for a want of a better name – oriental romances and fairytale retellings.

(Of course The Star-touched Queen by Roshani Chokshi turned up as I was reading this series…But I can’t read it right after! They’d be too similar – a discovery I’ve found while reading high fantasy)