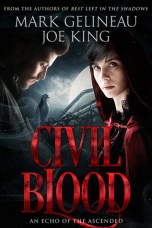 Thank you to Netgalley and the Publisher for the chance to read this book in exchange for an honest review.
Publish Date: 15th April 2016

Title: Civil Blood
Authors: Mark Gelineau and Joe King
Pubisher: Gelineau and King
Book: #7 of An Echo of the Ascended and #2 of Best Left in the Shadows
Genre: fantasy/mystery
Found: Netgalley
Rating: 4 Voodoos

Civil Blood is the second novella of the fantasy series Best Left in the Shadows. It is a fast-paced, twisting story of love, loss, and revenge in the dark underground world of Lowside.

The King of Aedaron reigns in splendour, while far below, in the streets and alleys of the underworld, a different kind of king emerges.

Alys and Dax have always been caught in the middle. Once they fought for love, and their worlds tore them apart. But now as they are forced back together, they must choose whether to fight once again.

But for what? And against whom?

In the world of Lowside, nothing is as it seems.

My review for the first book of the Best Left In The Shadows series can be found HERE. Ms4tune’s review of Civil Blood can be found HERE. For all other reviews from this series please click on the Gelineau and King tag in the margin.

It feels like forever since I’ve read a Gelineau and King mini novel so what better way to break the fast than with my second favourite storyline out of the four?

When last we left our heroes, they were renewing their acquaintance after a failed romance. Nothing exciting there, you may think, however this extract of their story proves that it’s all far more complex than we ever realised. It also begins to show a bit more of a connection to the other stories. No mention of any of the other characters, but Artifacts and Ruins are dropped into conversations.

Dax and Alys are trying to find their equilibrium with each other again, not to restart their romance, but perhaps to forge a friendship, but it will never work if neither of them are honest with the other. They seem to have opened themselves up to the hurt already, but not the honesty, which is going to make for interesting times. Strangely I’m ok with that, I’m perhaps more focused on the great big hidden mystery going on. What happened?! Also, more to the point, WHEN?! This is a very important point, because I feel it will set the tone for all of their history. Before the orphanage? Before they met? During their romance? I’m pretty sure that it wasn’t after…or am I wrong?

It seems as though Dax is convinced that he has more need for Alys than she does for him, so when she turns up seeking his help, he’s pretty surprised! Of course nothing is ever straight forward with these two and unfortunately they seem to be caught in the centre of other peoples plots. We sort of know who the key players are, but both of them remain a complete mystery and clearly nothing is as it seems, I mean the blurb told us so! I’m interested in finding out which side is actually which, because see the second part of the previous sentence…

I’m hoping these guys survive the oncoming storm and perhaps make a side of their own. They’re being pitted against each other and if everyone else had their way they’d probably destroy each other two. But Dax’s family seems important, so I’m wondering if Alys’s is too. Are they the key points in this story, or is what they uncover what we’re meant to focus on?
Only one way to find out.
NEXT!