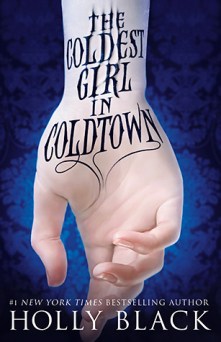 “This is the world I remade with my terrible mercy.” – Page 70

A vampire epidemic means that those infected are locked into what are called Coldtowns so that when they turn, they are restricted from attacking the population. Anyone can go in, but rarely does anyone leave.
Tana wakes up the morning after a party to find herself surrounded by corpses. The other survivors number her, now infected but still charming ex-boyfriend and a mysterious boy with red eyes.  She realises there is only one place they can go.  They need to be inside the gates of the nearest Coldtown before they go cold. And just maybe, she’ll go with them.

Yes, this book is about vampires, but before you roll your eyes and walk away, please read on.  Twilight has given vampires a bad rep – a popular series about an interesting type of vampire (That people rarely seem to understand) which I liked when I first read them. They were my introduction to love triangles and my partial dislike for the series has grown from the hype and with every other love triangle I read, but this is not a post for the defending or condemning of Twilight, it’s about why you should read The Coldest Girl in Coldtown and you really should.

I would just like to say, I nearly went with 4.5 voodoos because it has an open ending and I like a wrapped up happily ever after, but I loved it all the way through till then and it really was a clever move, now both sides of the argument are happy.  AND DESPITE THE HINT IN THE BLURB; no love triangle!! So happy.

Wasn’t too much of a fan or the twins, or Aidan-he was a selfish coward most of the time, but he comes through. Tana, despite the odd name my brain kept insisting was Tanya, was a great lead character. Even when the right thing to do seemed like the stupidest thing ever, she still did it, no weak and wilting pansy was she! Once she made up her mind, she followed it through. And I love how her very first, so very stupid idea turned out to be the greatest idea ever.
And finally, Gavriel. I loved him. The right touch of wounded crazy and an amazing name has made him a favourite character for life. It helps that he reminds me of one of my own too I suppose.  Something distracts him from his plan and he goes on an adventure as only the immortal can.

Annoyingly there was a character called Marisol, my brother has a song of the same name and as we share an iTunes library, it comes up in my shuffle play. Every time I read her name I sang the song….
Then there were the vampires. They weren’t romanticised. Well, they were sort of, they always are for some people, but from the point of view of the story, they weren’t, which Tana knew well.  They were violent and evil and all over the place.  Sometimes literally…

I would have liked more of the story, more back ground, more depth, but I like that it was a standalone as often series carry on for all the wrong reasons. Not to mention it was so very clever. Of course, you need to notice the little things to really get it, but if I can spot them, you can! I just loved it all.
Every other chapter was a catch-up chapter. Back story, blog posts, things happening elsewhere (because while this wasn’t first person,  we follow Tana). This was distracting somewhat, it was information we needed, it made the story, but it did disrupt the flow a little. I can’t protest too much though, as one of my favourite lines came from one of these chapters.

When I review, I’m  always worried what I want to say will ruin the storyline, but I’m just going to say this because I feel it’s very poignant;  this is a story that happened because a girl put her hand out to help a vampire up and, captivated, he went with her to see what she would do next.

Will definitely read this again!