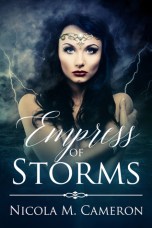 “Never thought I’d have a grand child before I had a child. That teaches me to make assumptions.”
- Location 2135

A king who must offer himself as royal consort to fulfill a treaty. A young queen and mage, unexpectedly married to the man she’s loved since childhood. Two countries, divided by geography and united by a political marriage, are poised on the brink of a golden age. But will vicious magic and unexpected betrayal tear both the royal couple and their kingdoms apart?

When King Matthias of Ypres has to fulfill a treaty and provide a royal consort for young Queen Danaë of Hellas, the only royal available for marriage is … him. Can he risk letting a blue-haired witch queen into his heart?

From political necessity, Queen Danaë finds herself marrying the man she secretly loves. Now she must win the heart of a king, prove herself as a mage, and defeat the enemies that threaten them both.

I’ve never read anything by Nicola Cameron before – that I can recall – so when I chose this – from my library whilst sat in standstill traffic, or when I downloaded it, I wasn’t expecting the sex scenes. I chose it on the premise and I wasn’t disappointed. I loved the idea that she loved him before and the whole role reversal when it came to the idea of their marriage. I don’t think I’ve seen something like that in a book before and it added a nice level of uniqueness to it which I thought was a big part of it’s charm. My only issue – a common one – was that it wasn’t long enough. While the major issue’s were solved there were a few teny tiny ones I could have happily hung about for.

I found the whole thing very well written, the story line and the sex. Any conflicts were reasonably solved and didn’t drag to fill pages. I have to admit though, once I’d discovered this was an adult book, I did expect that the storyline wouldn’t be as good, often you have great sex scenes and a crappy plot OR you have crappy sex and a decent plot. I thought they were both pretty healthy in this book. I was wrong. I was expecting obvious things, which mean’s I missed the less obvious ones and they snuck up on me.

I really enjoyed this world and I would love to read more about it. I noted that someone had mentioned in their comment on goodreads that this was unlike anything else by this author, which is a shame because this was a good mix of everything and I want more! Hopefully there will be sequels (hinthint.)

2 comments on “Review: Empress of Storms”