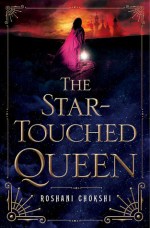 “My kingdom needs a queen. It needs someone with fury in her heart and shadows in her smile. It needs someone restless and clever. It needs you.”
“You know nothing about me.”
“I know your soul. Everything else is an ornament.”
-Page 68

Title: The Star-Touched Queen
Author: by Roshani Chokshi
Publisher: St. Martin’s Griffin
Book: StANDALONE but to have compnion
Genre: ‘Oriental’ Fantasy/Myth retelling??
Found: Not sure, been waiting for it for AGES
Rating: 4 Voodoos

Fate and fortune. Power and passion. What does it take to be the queen of a kingdom when you’re only seventeen?

Maya is cursed. With a horoscope that promises a marriage of death and destruction, she has earned only the scorn and fear of her father’s kingdom. Content to follow more scholarly pursuits, her whole world is torn apart when her father, the Raja, arranges a wedding of political convenience to quell outside rebellions. Soon Maya becomes the queen of Akaran and wife of Amar. Neither roles are what she expected: As Akaran’s queen, she finds her voice and power. As Amar’s wife, she finds something else entirely: Compassion. Protection. Desire…

But Akaran has its own secrets—thousands of locked doors, gardens of glass, and a tree that bears memories instead of fruit. Soon, Maya suspects her life is in danger. Yet who, besides her husband, can she trust? With the fate of the human and Otherworldly realms hanging in the balance, Maya must unravel an ancient mystery that spans reincarnated lives to save those she loves the most…including herself.

I don’t know where to start! So I’ll just start everywhere and this review will be all over.
Perfect.
I LOVED Amar. I loved his pretty words and I loved his encouragements of Maya, to be HER and not to think the way she thought he wanted her to, but to think her OWN way. He even said at one point he was fine with WHATEVER decision she made, but she had to THINK. It’s obvious he’s very in love with her and it kinda gives some of the game away – but then it’s meant to.
So, understandably, I was LIVID with Maya for the way she reacted when she found out who he was. Especially with their belief system! On a side note, these people had a lot of issues with people dying despite their believing in reincarnation… (this could be a major plot hole OR just simple evidence of the stupidity of humans. Honestly, I’m taking it as the second, because there really are some silly people out there and I can totally see someone reacting this way.)
Where was I?
Oh yes, LIVID I tell you! Luckily she sorts herself out and gets on with it and I commend her on that, but I’m still not a fan. Ok, you can argue it all started with miscommunication , but ugh! I’m so close to saying Amar needs a new match. But, I guess some people might think her reaction fair.
(it’s not.)
It’s very hard to try putting what I want to say into words, basically it can be summed up in two sentences, but this is a (hopefully) spoiler free review! So I’m trying to beat around the bush. (SO sorry if I failed!)

Apart from that I enjoyed this world and it’s characters. Some of it was predictable, the way legends and myths can sometimes be, but at the same time there were some well hidden things that rounded out the whole thing nicely. If you’re a fan of elegant writing and vivid imagery this is a book for you. Personally I’m a fan of flowery, shiny lines that take some re-reading to understand. The more you read them the deeper they are. LOVE it.
And there’s a knitting elephant.

Though I have to say I AM very confused. I was seriously hating on Maya for a bit there and yet I’ve given this book 4 Voodoos! (Pretty sure it’s not all for Amar). I’m also pretty impressed I kept going after I swore a blue streak at Maya and I think that that says a lot about this story and how it’s written. Maya did grow into herself and I think that, if Amar can forgive her for stumbling a bit, we probably should too.

I’d love to know if this was based on a spesific myth/legend, so I may drop the author a question on goodreads. I’m also highly curious who the next book will be about. There’s one main loose end that I can see, so hopefully it’ll be over that!

But now I’m going to go give Ms4Tune this book, so she can read it and then I can say my two spoiler laden sentences. Probably at some volume/using capitals…