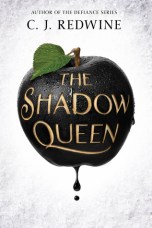 “Nothing scares the wicked so much as the realisation that someone has chosen not to surrender, even when the cost of defiance is almost too much to bear.”
- Page 157

Lorelai Diederich, crown princess and fugitive at large, has one mission: kill the wicked queen who took both the Ravenspire throne and the life of her father. To do that, Lorelai needs to use the one weapon she and Queen Irina have in common—magic. She’ll have to be stronger, faster, and more powerful than Irina, the most dangerous sorceress Ravenspire has ever seen.

In the neighboring kingdom of Eldr, when Prince Kol’s father and older brother are killed by an invading army of magic-wielding ogres, the second-born prince is suddenly given the responsibility of saving his kingdom. To do that, Kol needs magic—and the only way to get it is to make a deal with the queen of Ravenspire, promise to become her personal huntsman…and bring her Lorelai’s heart. But Lorelai is nothing like Kol expected—beautiful, fierce, and unstoppable—and despite dark magic, Lorelai is drawn in by the passionate and troubled king. Fighting to stay one step ahead of the dragon huntsman—who she likes far more than she should—Lorelai does everything in her power to ruin the wicked queen. But Irina isn’t going down without a fight, and her final move may cost the princess the one thing she still has left to lose.

YAY! SNOW WHITE! I’ve been waiting for a good Snow White retelling for ages!! Or…for any Snow White retelling actually. Once Upon A Time brought the tale to my attention (HATE what Disney did with it, maybe they’ll fix it with a live action one?) but finding good retellings of it has been something I’ve not been able to do (any recommendations? Please leave me a comment below!)

This was an interesting retelling – it was pretty close to the original, in several ways (barring dwarves) but I won’t list them because I’m petrified of giving away plot points!  I liked that Lorelai was fighting back, and how she ended up doing that. She was quick and clever and an overall interesting character but I’m not sure how I feel about her, to be honest. I think she could have done with a little more fleshing out.
I loved Leo, he was fantastic and I couldn’t help but feel for Kol. I’d have loved to have seen more of him, especially at the end. I’d have liked a nice little wrap up for the troubles in his land. And I’d have liked to see his sister again and her reaction to his adventures.

Then there was Irina (The Evil Queen) and I just can’t stand people like that. The ones that think they’re entitled to something, especially when it’s something someone else has. The ones that imagine snubs and slights and pull the world down around their ears because they should have whatever-it-is right now! She was well written in her horribleness, we get a lot of back story from her which is good for building our dislike of her.

I found this world very fascinating too. We’ve learnt about two of the kingdoms within it so far and from what I’ve read this is a world that will feature several standalones. I hope this means that these guys will crop up from time to time and I wonder what other fairytales might be going on in the other kingdoms? I’d have liked some more information on the land and countries therein. We get a pretty good background on the main characters, but a bit more about the world would have made it all sit more comfortably I think.

I have to say though, despite all it’s fantastic, it was just missing that little something. Maybe the end dragged out too long,maybe there wasn’t enough character detail, I’m not sure, but I did end up sitting down and reading it through the second half instead of doing what I’d hoped to be doing…
Perhaps aimed at a younger audience, possibly mid teens, depending on the reading level.

3 comments on “Review: The Shadow Queen”