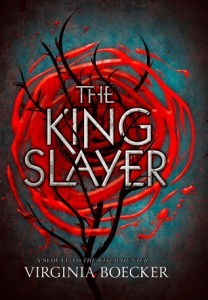 The usurper
Elizabeth Grey’s former master Blackwell, now revealed as terrifying dark wizard, has crowned himself King of Anglia.
The healer
And little did she expect that handing over the powers of her stigma to save the life of the boy she loves would change him beyond all recognition.
The assassin
With only her own strength and skill to rely on now, can Elizabeth hope to overcome Blackwell?
And must she sacrifice herself in the attempt?

Contain spoilers from the last book!

I, like many other reviewers it seems, thought this series was going to be a trilogy, but it’s not. King Slayer is the exciting, action-packed and heart-stopping conclusion to Witch Hunter. It’s full of action, betrayal, revelations and friendship. If, like me, you struggled with the pacing of Witch Hunter do not fear, because there isn’t a dull moment to be found in this amazing finale!

I will admit that I went into this not remembering a lot of Witch Hunter, but it wasn’t long before I started to rejoin the dots. It was very easy to re-connect with Elizabeth who, in the last book, we saw sentenced to death by her comrades, rescued by her enemies, find out everything she knew was a lie and then fight against her previous leader, Blackwell, to save the life of the magician, Nicholas. I liked that Elizabeth hadn’t changed much since the last book. She’s still very independent and head strong even if she has lost most of her physical strength. She goes through a lot of rather sad and crushing events in this book but rather than dissolving into tears she sucks it up and gets on with it. Her relationship with John is tested in this book and I loved them as a couple.

I can’t believe how much Virginia Boecker managed to fit into this book. There were numerous battles and fights, all described in such detail that you could image absolutely everything, so many meetings, all full of important information, and so much character development! This was miles better than the first book which I found to stop and start all over the place.

I did laugh when I re-read my review of book one and found I had referred to a character, George, quite a lot. I said that I found him slightly useless and that he and Schuyler could be interchangeable as they both filled the role of ‘Man-Friend’. Why did I find this funny? Well to start with, because I couldn’t remember him at all, but also because, he wasn’t in King Slayer, well not until 70% anyway! When he finally turned up with an ‘Oi!’ I dissolved into giggles because, up to that point, I thought I’d made him up! His part in King Slayer was only short, and to be honest I’m glad it was because the balance between the characters was brilliant and I think if he had been added in, it wouldn’t have worked as well.

By removing George, Virginia Boecker was able to introduce a few new and more exciting characters. I really liked Keagan, she was mouthy and confident and had an amazing magical ability which she put to good use time and time again. (I imagined her like Brienna from Game of Thrones). We also got to know a different side of Malcolm, the king who had been sleeping with Elizabeth in the first book and was the reason she was arrest in the first place. It was interesting to hear his side of things, and see that he wasn’t a complete monster, but a stupid fool too willing to believe lies and too cowardly to take action, but he redeemed himself.

Overall the plot was perfect and I can’t wait to see what else Virginia Boecker has to offer us.

P.s. I so saw that half way revelation coming! It was so obvious at the end of book one, but it was still amazingly entertaining and brought an interesting twist to the end of this book.