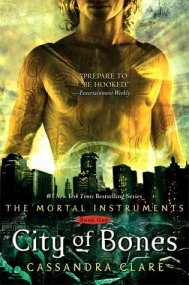 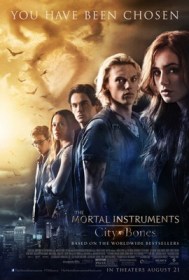 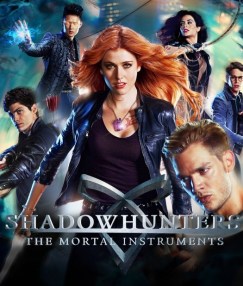 Welcome to our first verses feature post! please keep in mind these posts are just a complete excuse for us to discuss in depth issues of adaptions that annoy us or that we love and you need to keep in mind that it will be riddled with spoilers as well as our own opinions. CONTINUE WITH THIS POST AT YOUR OWN RISK. It is advisable to read and watch everything relating to this subject matter before proceeding. Thank you for your attention.

I don’t quite know how to structure this post to be honest with you, even though I’ve been really excited to do it. I think it’s basically going to be a complete mess of complaints and comparisons…

City of Bones (City of Ashes/City of Glass)

When fifteen-year-old Clary Fray heads out to the Pandemonium Club in New York City, she hardly expects to witness a murder― much less a murder committed by three teenagers covered with strange tattoos and brandishing bizarre weapons. Then the body disappears into thin air. It’s hard to call the police when the murderers are invisible to everyone else and when there is nothing―not even a smear of blood―to show that a boy has died. Or was he a boy?This is Clary’s first meeting with the Shadowhunters, warriors dedicated to ridding the earth of demons. It’s also her first encounter with Jace, a Shadowhunter who looks a little like an angel and acts a lot like a jerk. Within twenty-four hours Clary is pulled into Jace’s world with a vengeance, when her mother disappears and Clary herself is attacked by a demon. But why would demons be interested in ordinary mundanes like Clary and her mother? And how did Clary suddenly get the Sight? The Shadowhunters would like to know… Exotic and gritty, exhilarating and utterly gripping, Cassandra Clare’s ferociously entertaining fantasy takes readers on a wild ride that they will never want to end.

So I’ve started with the book because it’s the original material. I found Clary was both more kick arse AND more annoying in this than the adaptions. She hates Izzy simply because she’s pretty and in both screen options this relationship is better. It’s horrid that in books or films etc they often make main females hate each other for no reason. She seems a lot more stupid about some things too which was getting on my nerves.
There’s far more to Simon in the book than either ‘screen’ option too. He shoots Alec’s bow and saves the day! Alec is far meaner in this too, or so it seems. He mellows out after a while and I’m looking forward to getting to know him some more. In this we are told that Clary and Jace are siblings and there are no hints that they’re not as that’s the end of book THREE! Plus in this Valentine gets the cup and Clary’s mum does NOT wake up…
Also, Simon is still human and Melion is not mentioned at all. Plus there’s a lot less fantastic Magnus Bane…

Additional: Having read the first three books (again) It seems that bits of book two are in the film and there’s something from all 3 books in the TV show, so this comparison is a little off and I should have been watching things now, instead of around the end of book 1…

The Mortal Instruments: City Of Bones

Set in contemporary New York City, a seemingly ordinary teenager, Clary Fray, discovers she is the descendant of a line of Shadowhunters, a secret cadre of young half-angel warriors locked in an ancient battle to protect our world from demons. After the disappearance of her mother, Clary must join forces with a group of Shadow Hunters, who introduce her to a dangerous alternate New York called the Shadow World, filled with demons, warlocks, vampires, werewolves and other deadly creatures.

I think that this was more accurate to the book than I remembered, though it wasn’t deemed an accurate adaption and it flopped. (Why?). Jace is far closer to book Jace than tv show Jace is. Some or all of his best lines are in there and it’s delivered so well by Jamie Campbell Bower that I find him quite believable as Jace and it just highlights the serious lack of actual Jace in Dominic Sherwood’s Jace (I’m not saying that this is Dominic’s fault, the writers are in charge of the lines) which makes Jamie my favourite Jace.
The relationship between Clary and Jace is more accurate in this too, with their greenhouse kiss and stuff, though the Alec and Magnus dynamic is just sort of awkward. Having seen the TV show, then watching this again, this Magnus seems quite flat in comparison. Almost as though he’s simply in it to deliver his news to Clary and to call Alec hot to further the ‘yeah, he’s gay’ subtext. He’s got none of the majesty or mystery of TV show Magnus which, what little I know of book Magnus seems to be closer and he seems to give everything up too easily, Clary and the others walk in and he just tells her everything.

I loved that the Shadow hunters had British accents and I thought this was a really clever way of showing they weren’t native to New York! I also liked that Clary’s kick arsery was mostly in this. Though they’ve thrown in Clary’s rune talent from book two, I guess to give us carry over for another film. They end up with the mortal cup and Clary’s mother. Hodge suggested to Valentine that he pretend to be Jace’s father to upset them – thus taking out the “ah! incest!” subplot.
And no one seems to be bothered that after a night with the vampires Simon no longer needs his glasses…I definitely find show Simon better – possibly because Robert Sheehan (film) is majorly Nathan Young from Misfits to me and I can’t really deal with him being anyone else! It’s very odd. I also like the show Alec MUCH more. It could be because he’s got a bigger role and we get to know him better than we do in the film, he didn’t seem to have much to him in the film at all, poor guy.

I like both Izzy’s though, despite them being very different. They’re both sort of a part of Izzy as a whole but I think that tv show Izzy probably fits my mental image of the distracting warrior woman Izzy is meant to be more than film Izzy, film Izzy is almost 2D, there because she needs to be – though not nearly as prop-like as film Alec!
And I have to say that I think I prefer film Clary over all. I’m not sure if it’s the way the parts are written or the actresses but she seems far stronger than TV Clary and she’s far less annoying than book Clary who seems incapable of listening to anyone and is unable to have a proper conversation with another girl without catty observations going on in her mind.

Clary Fray is a normal teenager living in Brooklyn with her mother. One day, she discovers that she is descended from a line of Shadowhunters; humans born with angelic blood that fight to protect our world from demons. After her mother is kidnapped, Clary must team up with three Shadowhunters: Jace, Alec and Isabelle and her best friend Simon on a quest to find her mother and recover her past.

When I first started watching this I couldn’t stop rolling my eyes. Clary was awful and Jace Just wasn’t Jace (where are his witty one liners??!). I stopped at episode 3, planning on never seeing any more. Then I saw a Malec meme on pinterest and I realised I’d completely forgotten the best thing about the entire series, the Warlock/Shadowhunter romance and their development as people! So back I went to the TV show, continuing from episode 4, which is the perfect place to start really because Alec and Magnus meet and Magnus is absolutely fabulous.
Clary and Jace stay off for the remainder, I don’t know what’s going on here, but Clary’s only talents seem to be art and being a pain – though maybe they’re saving her true talents for later.
Also where the heck did all the other people in the institute come from?!
The sibling revelation was a little more accurate in this than the film, but I’m pretty sure there’s something in this about them not actually being related because I remember (mistakenly) thinking “Why couldn’t they leave that alone, this is a netflix thing after all, isn’t it?!”.

This has a surprise alternate reality episode that’s something I’m pretty sure book 1 said would be completely impossible, but whatever. It was actually quite amusing to see how they all were in a world without demons and shadowhunters. Sizzy makes an appearance – I know little about this ship, just that it exists – and Clace is going strong. We see Malec meet and their attitudes/roles are reversed which is actually adorable. But one thing I’ll point out here is that both Clary and Jace visit this world and they know that alternate Clary and Jace are dating and are therefore NOT brother and sister… so why haven’t they remembered this?!(Actually, where was her brother?! Because he should have at least been in some photos in the apartment if not spoken of by her parents) Plus, has no one ever thought about a simple DNA test?!

The storyline is pretty messed up in this too. A few things are pulled in from later books (and the other series apparently), but there’s a lot that’s not in the books AT ALL. It’s either been changed or added out of seemingly nowhere. Luke being a police officer NOT a book store owner (new). Izzy being in a relationship with one of the Fae (book 2, though more serious in the show), Alec getting married to some pretty blonde inquisitor to keep their families happy (new), Magnus accidentally crashing the wedding and Alec calling it off so he can be with Magnus [with the inquisitors blessing](so totally new and fabulous), starting with a public kiss not a private one (possibly to be like the one in book 3) and Valentine getting the cup (correct) and Jace joining him (not so)…
Oh, and Clary’s mother waking up…
plus, Simon’s been a vampire for ages already…
While the book is written from Clary’s POV, it’s almost like she’s not the main character in the TV show. Considering how concentrated they’ve made Magnus, maybe he’s the star? Most definitely more like book Magnus and far better than film Magnus.

While the books have more information than either the film or the tv show (obviously) and I thought the film wasn’t a horrid adaption (like Divergent turned out to be) and despite the HUGE storyline change in the show, I have to say I think the show might be my favourite. I blame Magnus. Well played, Harry Shum Jr, well played! But we’ll see once I’ve finished all the books and I mean ALL the books and I’ve perhaps re-watched ShadowHunters, because maybe when I know more the show will be less sparkly.

What to know what’s annoying though?
IN BOTH ADAPTIONS THEY MAKE IT OBVIOUS TO THE AUDIENCE THAT JACE ISN’T CLARY’S BROTHER! We don’t really feel their pain this way.

Also, it seems the TV show stole all the props from the film! Haha, no, but seriously, they have the same props, it’s weirdly creepy!

After my all over the place ramble, what do you think?
Which has been your favourite so far?
What have you noticed about these three vastly different same-story things?

One comment on “Book vs Screen: City of Bones/Mortal Instruments/Shadow Hunters”