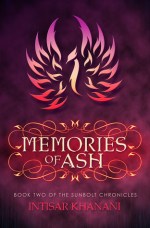 “What an apt description of what I was after casting my sunbolt: a memory of a spell.”
- 52%

In the year since she cast her sunbolt, Hitomi has recovered only a handful of memories. But the truths of the past have a tendency to come calling, and an isolated mountain fastness can offer only so much shelter. When the High Council of Mages summons Brigit Stormwind to stand trial for treason, Hitomi knows her mentor won’t return—not with Arch Mage Blackflame behind the charges.

Armed only with her magic and her wits, Hitomi vows to free her mentor from unjust imprisonment. She must traverse spell-cursed lands and barren deserts, facing powerful ancient enchantments and navigating bitter enmities, as she races to reach the High Council. There, she reunites with old friends, planning a rescue equal parts magic and trickery.

If she succeeds, Hitomi will be hunted the rest of her life. If she fails, she’ll face the ultimate punishment: enslavement to the High Council, her magic slowly drained until she dies.

My review for book 1 can be found HERE.

So, I’ve been told there will be four books in this series. FOUR!!!!! I know I’m half way through now and there are at least two major plot points to be resolved – barring the main issue – but someone really needs to sort out Blackflame right now. Though having said that I’m not as mad at him as I think I should be. Probably ’cause I’m convinced Hitomi’s got this. (mainly because she totally has)

Speaking of Hitomi, I have to tell you I was wrong, she IS pretty fantastic, no two ways about it. You could argue she has a Hero complex, she likes to save people. But it’s more because she can than because of any glory or anything and the best bit is that people are taking notice and are rethinking the world around them. The Ghost may have been the head of The League and therefore someone Hitomi looked up to but right now I think she’s far surpassed him and when he hears of her deeds be better be freaking awed (Also, who is he?!) And the best bit is she’s still ‘quite human’ as I said my my review of book one, but she’s simply fantastic at being so. She’s doing what she’s doing because it’s right and for all that she was once pretty bad at planning I’m thinking she’s pretty good at it now – well at least for having the right intentions at the right times at any rate.
Most definitely my favourite character in this book!!! She’s really growing into herself and I think she’s already pretty wise, but if she lives long and well she’s going to be so maddeningly clever she’ll drive her grandchildren crazy.

The different parts of her life have started to meet back up and it was nice to see some old faces. I was surprised to find I cared a lot more about the old faces this time around thought I also cared for the new faces we came across so it wasn’t simply because of nostalgia. The story is beginning to build up quite nicely now and we’re learning a nice amount about this epic world. However I have one issue. Where did the Northlands come from? I don’t remember them being mentioned before, was I not paying attention?

I’m looking forward to Val being more involved soon and learning some more about him! He’s still a massive mystery. Though he was in this book we’ve still got a lot to learn. I also think that the mages in this world have a lot to learn and I look forward to Hitomi teaching it to them…

2 comments on “Review: Memories of Ash”