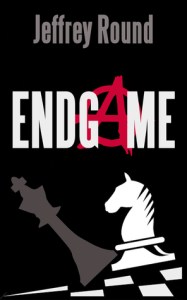 Thank you to Netgalley and the publisher for the chance to read this book in exchange for an honest review.
Publish Date: 18th June 2016

A modern retelling of the classic Agatha Christie tale of suspense and murder, And Then There Were None.

When Harvey Keill, ex-manager of the Ladykillers, arranges a reunion for his notorious punk band on a remote island off the coast of Seattle, it seems as though the group’s glory days are about to return.

One by one, the band members and their guests arrive. Lead singer Spike Anthrax, bassist Pete Doghouse, and guitarist Max Hardcore confront one another for the first time since their well-publicized and highly acrimonious split fifteen years earlier stopped them from finishing their musical testament to punk rock genius: Endgame. They are joined by an entourage of groupies, girlfriends, one of America’s best rock critics, and a real estate agent invited to put the island up for sale.

No matter — a party’s a party, right? Wrong. Once everyone has gathered, a dark secret emerges from the past to haunt them and, one by one, the guests begin to fall prey to a mysterious fate.

At the end of 2015 I watched the BBC adaptation of Agatha Christie’s ‘And Then There Were None‘. It was a gripping, twisted tale full of misdirection and confusion set in the 1930′s! I loved it, especially because the ever so hunky Aiden Turner was in it. It’s because I watched this that I feel able to say that Endgame really is a modern retelling of ‘And Then There Were None‘ and quite a good one at that!

Endgame follows the reunion of a punk rock band called ‘The Lady-Killers’ on an Island far from civilisation. Along with the band members there is a number of other people with interests in the reform of this particular band. Groupies, family, lawyers and magazine writers are in amongst the 11 people deposited on the island. But it soon becomes apparent that not everything is as it seems. One by one people begin to die and signs start to point towards a past secret that connects them all together. Will they all pay for the past crime they committed?

If you haven’t read ‘And Then There Were None’ then you’re in for a treat. The plot is exceptionally exciting and promises to have you questioning ever character! But if you have, I still feel there is a lot of enjoyment to be had from trying to guess who is next on the hit list, why and who is the mastermind behind it all!

The characters themselves aren’t really likeable in any way, non of them seem to feel any responsibility for their past crime so when they begin to die I didn’t really feel sorry for them. In some ways this was a good thing as it meant I was plotting their demise before it happened! Another problem I had been struggling with was telling them apart, especially at the beginning. There were 12 ‘villain’s’ in this retelling, and in my opinion this was a little too many. It lead to very lengthy introductions, and because I already knew the general plot I wanted the deaths to beginning. Grim I know, but I can’t help it! Once they started to die it was easier to distinguish among the remaining characters but this didn’t really happen till about half way through the book.

I think each death was rather cleverly inspired by the eery song we were introduced to at the beginning. I actually wrote it out and tried to predicted who would die by which line in the lyrics, right at the beginning, quite a bit of fun actually.

All in all this is definitely another retelling of a classic I would recommend whether you’ve read the original or not. 2016 has been rather good on the retelling front!