by K A Linde 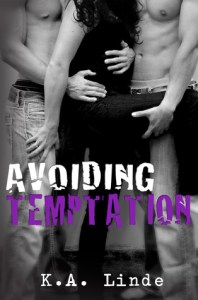 Two years after walking out of Jack’s wedding, Lexi has finally put her past behind her. She has made up her mind about where her life is headed. This time, she is sticking to her guns, no matter what.

That is, until a phone call shatters the fragile grasp she has on her new life. Lexi is forced to question everything she thought she knew about what she wanted, and life-changing events push her to reevaluate the very plans she holds so dear. Nevertheless, Lexi has to choose her true path. That might just mean deciding, once and for all, that she doesn’t have to answer to anyone but herself.

In this highly anticipated final installment of the bestselling Avoiding series, follow Lexi as she juggles a new career, a new city, and the burgeoning affections of three very different men.

It’s hard to find the words to sum-up how I feel about this conclusion to the Avoiding Series. I was such a massive fan of books one and two. I felt I understood Lexi, that I understood how she could love Jack even though he broke her over and over again, I cheered her on as she grew and learnt how to be happy without him, and at the end of book two I thought we had broken the cycle of self-hate and self-destruction, but apparently I was wrong.

Lexi hadn’t developed, she hadn’t become a better person and learnt how to respect her self, all she’d managed to do was shift the focus from Jack and push her feelings of jealousy, confusion, and denial onto her relationship with Ramsey.

It felt like I was watching an episode of Jeremy Kyle! You know the episodes where the jealous infused lover demands a lie detector test of their spouse/ significant other only for us to discover that they are the lying cheating scum bag all along. Lexi spent a lot of this book accusing Ramsey of still having feelings for Parker, accusing him of hiding things from her and of doing things without asking her first. All things that Lexi was actually doing herself! For me it seemed that all her paranoia stemmed from her still having feelings for Jack and still having flirtatious encounters with John, all things that she hid from Ramsey. It drove me up the wall every time she accused Ramsey because the poor guy literally had no idea what was going on. I just wanted to hug him.

Yes Lexi and Ramsey’s relationship wasn’t perfect but if Lexi had been honest with herself and admitted she didn’t really think their relationship could work, then we could have been saved all this drama! Why bang on about honesty all the time and then lie to yourself? Lexi and Ramseys relationship lacked all evidence of happiness, so when I was reading about them getting engaged after two years of hell I was like… why?

Avoiding Temptation didn’t have the same feel to it as the other two books. There was clearly only one outcome and it felt like the story was being drawn out for no other reason than to make us suffer. The flash backs weren’t as successful because the characters and feelings were to similar to distinguish between and the drama seemed to pop up out of no where just to add another ridiculous situation for Lexi to get confused about. John didn’t need to be in this story at all, Bekah continued to be the OTT Cowbag for no apparent reason and Lexi some how was always forgiven for her stupid outburst! For most of the book I was like…

I wish I could say I was happy with the conclusion but I had had enough of Lexi by the end and kind of didn’t want her to be happy with anyone, anymore. How she got away with stringing all three men along and yet still come off as the nice girl, I have no idea!

I was sad to see Ramsey get twisted into something I didn’t really recognise but I was glad to see Jack finally redeem himself and become a decent human being. Shame it took him so long.

All in all, this may not have been the conclusion I was hoping for but it’s over and I still have books one and two to re-read whenever I want. (Always a silver lining).