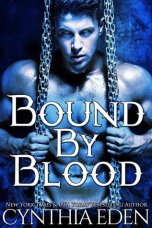 “The enemy of my enemy… Is my husband.”

Vampires and werewolves have been blood enemies for centuries, but now a new threat is rising…demons are escaping from hell and those demons are intent on wiping out both the vamps and the werewolves.

When you have no one to trust…

In order to stop the demons, pureblood vampire princess Morgan LaBeaux agrees to the treaty offered by werewolf alpha Jace Vaughn. She’ll mate with him, share her blood with him…and in return, the wolves will aid the vampires in this battle.

The enemy of my enemy is my husband…

But Morgan doesn’t realise just how dangerous the wolves can truly be. Jace has been waiting years to claim her. He’s set a trap for his princess, and now that he has her, Jace doesn’t plan to let her go. He’ll send the demons back to hell, and he’ll keep his vampiress – forever.

Because the blood binds all.

I’m pretty sure I’ve read a similar storyline to this before – vampires and werewolves having to intermarry – but I can’t remember who or why or when so it’s really no help that I mention this beyond the fact that if I did read it, I enjoyed it! So that’s most likely what made me download this and is certainly what made me read it now. I also wondered if this was the same one, but I’m 97.6% convinced that it’s not.

The set up in this world is interesting. There are two types of vampire, those born to it and those made – a little like the Nightworld world created by L.J. Smith. That’s where the comparison ends however, because these guys live as humans for the first part of their lives – which seems somewhat cruel to me, poor guys. But, I guess you could say it makes them even with all the others…

In this story, one of the born vampires chooses to marry a werewolf so as to unite their people against the demons. But it turns out they’re mated and he’s been hanging around waiting for her for some time. Happily she’s fine with this – I do so hate it when they throw a fit at the guy for something he can’t control either.

There was a lot of hinting about something happening of they shared blood. I’m not sure if it was just a prejudice though because I never saw any worrying outcome, unless it’s something that will crop up somewhere else in the series? There are 4 others and they’re perhaps something I’d reconsider visiting later on, once I’ve cleared some space!

The characters are well matched and there’s plenty of world information and character building and development for the length of the story. They have bitey bloody sex but it fits in with the rest of the story and isn’t over the top all over the place and doesn’t take over the storyline either which was nice, I felt it was all well balanced.