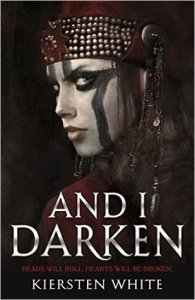 Thank you to Netgalley and the publisher for the chance to read this book in exchange for an honest review.
Publish Date: 7th July 2016

I can honestly say this is my favourite book of 2016 so far! And I Darken was full of depth, intrigue and devastation. The only time I put this down was when it was forcible removed from my hands or when my eyes were so overwhelmed with fatigue that they wouldn’t focus and had black spots floating around in them. Even then I dreamt of running through the pine trees listening in on secret conversations about power and murder. It was fantastic!

And I Darken follows the life of Lada and Radu as they grow up. We watch them as they learn from every one of their misfortunes, every one of their mistakes and every time they are betrayed. They are two very different characters but forever linked by their blood and their shared past. Lada is the strong big sister, determined and aggressive while Radu, the younger brother is quiet, loveable and vulnerable. They both know what they want though, and aren’t afraid to manipulate those around them to get what they want. They will do anything, sacrifice anything, sacrifice anyone, to get what they want because that’s what they learnt from their father.

Lada is probably the most twisted character I’ve ever read about and yet everything she thought, said and did made sense! Some how I felt every move she made was justified and that scared the hell out of me because she did some cruel and horrible things in this book. I loved that she was a strong independent female in a time when that was unheard of and that she refused to be less than the men around her. She was mesmerizing.

It took me a while to fall in love with Radu. For the first third of the book Radu was pathetic and whiny, the complete opposite of Lada. But it wasn’t long before he started to realise he needed to grow up and wow what a transformation! I have heard some people compare this to Game of Thrones and I can see where they’re coming from, Radu would be Tyrion Lannister. He used the way other people perceived him in order to manipulate them. If anything he was the clever sibling. The likeable sibling in the end.

The plot is a twisted tapestry of politics, religion, sex and lies. It’s so beautifully crafted that it appeared seemless, faultless a dark and brutal look at history through a new set of eyes. This is a rare and amazing find and I yearn to read the next instalment from this wonderful series. It will be MINE! (Sorry channeling my inner Lada).

2 comments on “Review: And I Darken”