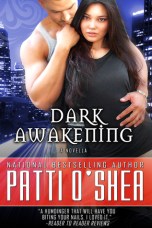 This is a novella that was originally published in 2007 as part of the Shards of Crimson anthology.

Kimi Noguchi is working as an intern for an advertising agency in Crimson City and she’s discovered that she’s a kijo or witch. She thinks having talent is cool, but her magic attracts the attention of a power-hungry Bak-Faru demon and she’s forced to call on another demon, Nicodemus, for help.

Nic made a promise to stay away from Kimi for her own good, but now that she’s summoned him, all bets are off. She’s his vishtau mate, a bond held in reverence by all demons, and he’s not about to let this opportunity pass him by. Nic plans to protect, woo and win his woman.

I didn’t realise that this was a book #7 before or during reading it. I’d say after too, except that now is technically after reading it and that’s when I found out about it being #7….

This had an interesting idea and having discovered there was 7 stories of back-history I do wonder if I’d have liked it more if I’d read them all. The main issue I had was that there was a nice build and then I sort of blinked and missed the ending. Also, after all the stressing out he did about hurting her because he was a demon, the sex scene seemed almost anti-climactic (haha)

Nic was a nice character, he was Mr Goodguy even when he didn’t really want to be. Kimi in comparison seemed a little whiny and annoying – perhaps to illustrate the age difference – but it was a little frustrating to read and I ended up not liking her as much. I think the only reason I ended up caring about her was because Nic did.

The outcome of the storyline was predictable, be this seems to be far more forgiving in novellas – I have no idea why this is true. I’ll take things from novellas I wont from full length stories. Perhaps because they have so much less space to build things properly and sometimes corners are cut and traps are fallen into.
This had a nice world. There were all manner of supernatural beings present, but we only met demons and witches. And, just like with anyone else there are good and evil in both groups, which was a nice balance.

Overall a good story, perhaps better enjoyed by those already invested – and therefore understanding of – this world.