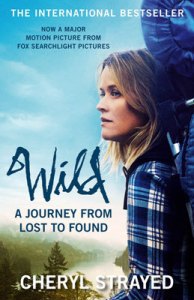 At 26, Cheryl Strayed thought she had lost everything. In the wake of her mother’s death, her family disbanded and her marriage crumbled. With nothing to lose, she made the most impulsive decision of her life: to walk 1,100 miles of the west coast of America – from the Mojave Desert, through California and Oregon, and into Washington State – and to do it alone. She had no experience of long-distance hiking and the journey was nothing more than a line on a map. But it held a promise – a promise of piecing together a life that lay in ruins at her feet.

Wild isn’t the sort of novel I usually read. For one it’s non-fiction and two, it’s an autobiography. I’ve tried reading autobiographies before but never actually finished one. I think it’s because, for me, they just record events in a linier narrative and I can’t see how they are going to end in anything other than ‘and that’s everything that’s happened up till now’. I’m probably being to harsh on autobiographies and probably missing out on a whole lot of mind-blowing stuff but up till now I just couldn’t get excited by them.

Cheryl Strayed’s story is told in a linier narrative but, unlike I feared, this isn’t a bad thing. It follows her as she travels along the Pacific Crest Trail on a mission to cleanse and heal, whilst finding a new direction for her life. Every now and then she reflects on past events that led to this incredible adventure allowing us to understand why this was so important for her. She doesn’t try to paint herself in a glamorous way, she just tells her story as it is, worts and all. She tells us about her prior spiral into chaos in quite a detached way, explaining her infidelity, her drug use and her numerous one night stands. But all of this is slowly washed away as we experience her, sometimes gruesomely difficult, trek across California and Oregon. She meets people along the way and while they bring light and laughter in short bursts of companionship, for the majority, Cheryl is alone. It was interesting to read that she felt she had no time to think about anything but the physical pain and exhaustion but it obviously gave her the time she needed to reset because the woman who left the trail at The Bridge of Gods was a completely different one to the one that started it.

Ok so Cheryl didn’t come across as the most likeable person but everyone has a past, some more shameful than others but it’s the fact that she realised her life was going down the shiter and actively went out to change it. Yes she stumbled a couple of times but who doesn’t. Trying and continuing to try even when it gets hard, (or even physically hurts), that’s what matters. That’s what I’m taking from Cheryl’s story.