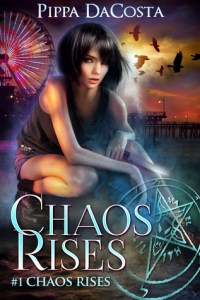 Thank you to Netgalley and the publisher for the chance to read this book in exchange for an honest review.
Publish Date: 29th June 2016

When the veil fell, any half-bloods not strong enough to withstand Chaos were torn apart. Some, like me and my brother, survived the Fall. Most did not.
That’s the good news. The bad news saw a whole other world try and devour ours. Demons, we call them. They came in countless waves. Destroying. Killing. Many people thought it was the end…
The Fall lasted a week.
Tens of thousands died.
Hell almost claimed our world as its own.
And then, from one day to the next, it was over. The veil came back, stronger than ever. I’m not sure if anyone knows how it was put right. But I do know it’s been six months since the Fall, me and my brother are on the run, and the leftover demons aren’t the most dangerous things in LA.
We are.

First things first, I’ve not read any of the Veil Series and I can confirm it is not necessary to have read them first. This series works as a standalone series and an accompanying series so if you feel like reading the veil series first, then go a head but if you (like me) want to dive straight into this one then that’s fine too! Either way, expect to have your mind truly messed with, they’re all LIARS! All of them!

Chaos Rises is set in what is left of Los Angeles after the veil closed. Demons stuck this side, stalk the dark abandoned areas of the City, area’s now known as Netherworld Areas. The Human’s carry on with their lives as though the demon’s don’t exist happy in the knowledge that the Institute will remove any demon that threatens their way of life. But, what they don’t understand is, most of the powerful demon’s know how to blend in, how to hide their true form behind a mask that looks human and so some demon’s walk among them! Half-Bloods are different because they are half human. They naturally take on human form but can summon their demon-selves at anytime. Gem and Delta are half-bloods who work for a higher demon Allard. Allard offers them safety in return for their servitude. But one day Delta goes missing and Gem is desperate to find out what has happened to her brother. Allard offers to search for him as long as she finds a powerful relic he needs. Gem’s search leads her to another half-blood, Torrent. And together they get into some seriously sticky situations.

This was actually a really fun, exciting and action-packed urban-fantasy. There was so much going on all the time that the pace never seemed to slow down! Gem was an intriguing main character. She was feisty and independent and yet devoted to her brother. I liked that they were so close – I love a strong family bond and these two had been through a lot together. It was easy to see why Gem was left feeling slightly unhinged without him. Well more unhinged than usual anyway.

One thing I really loved about Gem was her constant struggle for control over her demon side. She was afraid of what her demon would do if she didn’t suppress it with a drug known as PC34A but even her Human side had its issues. I loved seeing her uncertain and scared because it made her more human. But by being more Human, Gem was left open to being deceived by the demon’s around her. Basically as long as you remember that Demon’s lie (like a lot) and Chaos destroys… you may survive this mind-blowing start!

There is some amusing and frustrating flirtations sprinkled into this book but nothing to heavy because if you don’t trust yourself you definitely can’t trust any other demon! I would love to see this played on more in the next installment.

I’m fully hyped up now, ready for book 2′s release later this year. I’m especially excited to see what will happen now that Del is back as throughout this book we were warned of his extra special powers. I suspect we will have some terrifying situations a head of us!