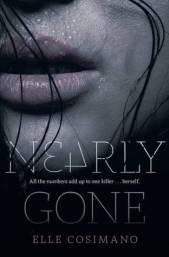 Life can be hard when your name is Nearly, you live in a trailer park and your mother takes her clothes off for a living so that you can actually afford to eat – teenagers are not kind. So Nearly keeps everything close to the chest, only her friends know of her obsession with the Friday personal ads and all her effort is focused on winning the scholarship out.  She lives by three rules, no bad grades, no trouble, no touching. And while these are her mother’s rules, she is happy to live by them, the first two will mean her freedom and the third, well, Nearly has a secret she’s told no one. When she touches someone’s skin she can taste their emotions. Not only does it give her a very personal idea of what someone is going through, it can also be overwhelming.
Then someone starts communicating through the Personals, giving clues to murders they’re about to commit and Nearly is the only one able to decipher them. But instead of taking her seriously, the police start to suspect her involvement, not surprising when the building evidence trail is pointing directly at her.
The informant they’ve thrown on her trail has come to believe her innocence and he’s willing to sacrifice his own future to keep her out of jail. Will she let him or is she as determined to save him as he is to see her free?

I loved this book. Took me a little while to realise it, I couldn’t read as much as I liked as fast as I wanted, Longer hours at work coupled with a head cold are not conducive to getting a book read, let me tell you! Quite possibly, not to good reviewing either, but let’s give it a shot. I was excited about this book and it didn’t disappoint. (I’m ignoring the tiny hint of a love triangle because it wasn’t REALLY a love triangle for the main and slight lack of a round up at the end because it was all mostly covered.)

I felt everything balanced well, the focus wasn’t on the romance, but the mystery and the murders because they were disrupting her life and through them the added layer of the love interest developed. She didn’t agonise over whether he liked her, she assumed he didn’t and got on with it. Finding herself in love with him seemed rather accidental and something she had planned on ignoring.
I was so happy when I came across Teddy. Rarely are characters like him included and fiction is the perfect way to introduce these different people into wider society.
This book unapologetically refused to go around defining everyone and putting them into neat little boxes. Good for it.

I’d love to see more of these guys. I’d love to see who Nearly becomes when she grows up. And I so hope they stick together, they make each other more rounded. Now I see why this was compared to Bones. Here we have a possible young Brennan and Booth (except without Brennan’s amusing and almost autistic stumbling through social situations.)