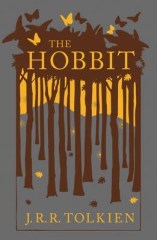 “Then the prophecies of the old songs have turned out to be true, after a fashion!”
“Of Course! And why should not they prove true? Surely you didn’t disbelieve the prophecies, because you had a hand in bringing them about yourself?”
-Page 276

This is the story of how a Baggins had an adventure, and found himself doing and saying things altogether unexpected.

Bilbo Baggins enjoys a comfortable, unambitious life, rarely travelling further than the pantry of his hobbit-hole in Bag End. But his contentment is disturbed when the wizard, Gandalf, and a company of thirteen dwarves arrive on his doorstep to whisk him away on a journey to raid the treasure hoard of Smaug the Magnificent, a large and very dangerous dragon…

I used to listen to the dramatised audio book so much as a child and when I tried to read it I was so sad I couldn’t. I was determined I was going to read it this year. This summer in fact. However, this summer is horrifically busy for me and it’s cut into my reading time horribly. However as a long time subscriber to Audible I thought it was actually time to listen to some of the audio books I’ve been piling up! One of which was this. The Hobbit, unabridged.

I was actually surprised at how short this was, 277 pages, but 11 hours and 2 minutes audio. I found the writing odd, perhaps because I’m used to a more modern style, which is why I’m actually glad I listened to it.
I found Bilbo to be a terribly sensible individual and I enjoyed his attitude much of the time. I know that the story is from Bilbo’s point of view, which is why the battle at the end was lacking detail, but I felt that it also meant that it lacked meaning. I’m sure that if I hadn’t known something happened, I’d have missed it completely, which is sad.

One thing I’m quite confused over is that if the other Baggins stopped speaking to him, how does Frodo come into the next? He sort of springs from a previously unknown strand of Baggins’s.

Also, I was sort of thinking that this story was a lot smaller than The Lord of the Rings – not in length but in happening, but the introduction to The Fellowship of the Ring explains a lot about life around Tolkien before and between his books, which was quite fascinating to listen to while installing doors on a unit and gave much insight into his own journey. Well worth a listen if not a read.