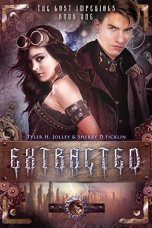 Thank you to Netgalley and the Publisher for the chance to read this book in exchange for an honest review.
Publish Date: 15th August 2016

Two opposing factions of time travellers vie for control of the future in this thrilling steampunk series opener dubbed “Interesting” and “Unexpected” by Kirkus Reviews.

Lex and Ember—two time travellers with no memories of their lives before being recruited into the time war—are torn between the factions. When Lex accepts a mission that lands him deep within the heart of the Telsa Institute, he meets Ember, and the past that was stolen from them comes flooding back. Now armed with the truth of who they were, Lex and Ember must work together to save the future before the battle for time destroys them once again.

Not what I was expecting, fantastic just the same!
A Steampunk story all about time travel is perhaps one of the more unique stories I’ve seen around. Especially when you throw in just who Lex and Ember are! Certainly something I wasn’t expecting. I’ve heard of her in stories before but I’ve never seen him.

The story was slow to start, it doesn’t really take off until Lex and Ember re-meet, which is at roughly 50%. I felt rather adrift at first as it was difficult to work out their ages – I really don’t think it’s mentioned until a little after half way through when Lex and Ember are reconnecting. (There was a whole wealth of reunion type shenanigans I was looking forward to, including Lex jokes which never happened and I think that was a major flaw. So much missed humour.)
I was also expecting Lex and Ember to be a couple, probably married and therefore older than they actually turned out to be. Therefore their friendships weren’t something I was investing in to start with and the references to ‘kids’ was very confusing. I was also disappointed when I first learnt who they were because it wasn’t what I thought I was reading, but I soon perked up again because the actual storyline was actually pretty interesting.

A lot of the time travel talk and the back and forthing certainly got a little confusing which was odd because it was of a less complex nature, being a teen book. But perhaps that’s because while reading it I was also reading another book and listening to a third as an audio book – I rarely/never have more than one book on the go because I can get easily side tracked and I can be quite forgetful but I guess it bodes well that even with the other storylines I often thought of this one.

I have to say, I don’t think all of my questions were answered, but I think it was only the bigger, series centred one that weren’t in the end. I’m not sure about the whole paradox thing to be honest. I don’t know why two of them didn’t just say “Well, we weren’t there before so…” But I can see what it was leading up to.

I’m a little sad this was a teen book to be honest, with an idea like this it could have been far more powerful with a slightly more complex storyline. Embers activities at the end seemed the most complex part and I was expecting a little more. I guess it may come up in later books as this is the start of a series, but the next book is more focused on another character so I could be wrong.