Top Ten Tuesday is a weekly feature hosted by The Broke and the Bookish that other bloggers are welcome to join in, to create Top Ten lists on varying topics. This week it’s Top Ten Books That Have Been On Our Shelves (Or TBR) From Before We Started Blogging That We STILL Haven’t Read Yet.

1 A Discovery of Witches (All Souls Trilogy #1)

Once I found goodreads my book buying really took off, I was able to find books similar to others I liked and I was able to track what books I had and wanted to have. Dangerous stuff. I cant quite remember buying this one, I think that it was perhaps prompted by the over popularisation of vampire stories. I’ve loved vampire stories since forever, I’m not sure if it was Christopher Pike’s The Last Vampire series (Which now has more!) or L J smith’s Nightworld series (Which does NOT have more dammat…) or even perhaps a random point horror book but Twilight certainly shifted the focus and while I enjoyed Twilight I wasn’t sure I liked what it did to vampire stories, so I decided I’d find something new. Obviously I wasn’t too adventurous to start as this is about a witch…and a vampire. It was part of a series though and I think this was around the start of my ‘must have the whole series’ compulsion so I never read it. I have them all now, so it’s time…

I found Mercedes Lackey through amazon. It recommended me one of her Valdemar books with very little description and the only reason I bought it was because I was in a book buying binge mood and I was born the same year that edition was published. Once I burnt through those I looked at more of he books. I loved the start of this series and I was pretty excited for this one – I think it was still around the time I thought that my favourite fairytale had to be different to my friends favourite so I’d chosen sleeping beauty. Then I realised I could like whatever the fluff I liked thank-you-very-much and I decided to wait for the one after this which is Beauty and the Werewolf. Of course by then it was time to re-read the others as I’d forgotten much of the story and while I love the start of this series I didn’t enjoy The Snow Queen quite as much and it put me off…Now I quite like Snow White and this one seems to be half Snow White too so I’m quite interested in reading them again.

I don’t like Classics, or to be more accurate, I don’t like old style writing and therefore I assume I don’t like classics. I’ve not read any yet because I’m scared of proving myself right. I don’t want to dislike them and so I avoid them. I’ve mentioned before how I’m convinced this may be my favourite if I ever get the guts up to read it. Well, obviously in 2010 I thought I’d found the answer! But then I thought I should know something of the original so I watched the 2005 Pride and Prejudice film and loved that so then I was right back to square one with the whole classic fear. I’ve since seen the film for Pride Prejudice and Zombies and I loved that too. So now I don’t know if I should be trying Pride and Prejudice before Pride Prejudice and Zombies or what. Also in my classic far list are Jane Eyre by Charlotte Brontë and Persuasion also by Jane Austin, of both I’ve seen some form of film of. Jane Eyre – 2011 Persuasion – 1995

I think this was a goodreads “Readers also enjoyed..” buy. Not that I’d likely have read the book that lead to this at the time but still…I think I got this before I realised that there was a sub-genre or two to the rather large ‘fantasy’ section and I wasn’t quite sure how to refine my search for what I was looking for so I was mass buying any book that sounded like what I was looking for. Possible links are: Eon by Alice Goodman, Grave Mercy by Robin LaFevers, The Assassin’s Curse by Cassandra Rose Clarke or The False Prince by Jennifer A. Nielsen.

Yay! A retelling! I love retellings and I tend to read them as soon as I can so I’ve no idea why I’m still yet to read this one. Perhaps because I don’t want to dislike it – as I have so many other Wonderland retellings – or maybe because I simply bought it along with quite a few other books? Or even because it’s hard to find the rest of the series and you know how I like to have a set… 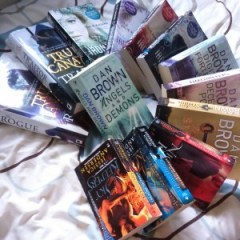 6 Angels and Demons (#1 of Robert Langdon)

Since: 2009 (ish)
Currently sitting on the ‘Unlikely to Ever Be Finished Series’ Shelf

So even pre-goodreads I was a sucker for a good series. I read Dan Brown’s The Da Vinci code and was so in awe of it that I wanted all of his other books. I currently own all of the series but have still only read The Da Vinci Code. Other series that have fallen onto this metaphorical shelf are: The Nightkeeper Series by Jessica Andersen,The Traitor Spy Trilogy by Trudi Canavan and Iron Fey by Julie Kagawa. 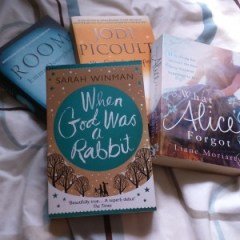 7 When God was a Rabbit

Since: Whenever I picked it up in Sainsburys that time… probably 2011
Currently sitting on the ‘I Thought Adults Had To Read Adult Fiction’ Shelf

Ok I have no idea where I got the idea from but some how I was under the impression that as an adult I had to read adult fiction. Something that, at times I find enjoyable, but in large doses a find a little tedious and un-exciting. Thank God it’s all a lie. Other books currently sitting on this shelf are: Room by Emma Donoghue, My Sister’s Keeper by Jodi Picoult and What Alice Forgot by Liane Moriarty. 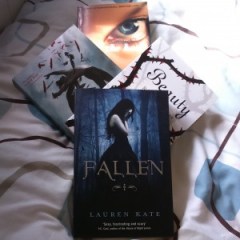 Since: 2010? I ended up with two copies of this for some reason
Currently sitting on the ‘I Read Twilight And Wanted To Read Anything Remotely Similar To It’ Shelf

Once I realised that adults could read YA guess what I read? Yep, you guessed it TWILIGHT. And as much as everyone disses it I hold my hands up and proclaim myself a Twilight fan. I loved it and it re-introduced me to all the things I missed about reading YA books. So what do you do when you read a book you love? Yes, right again, (gold stars for you!) you buy anything sold with the disclaimer ‘if you loved twilight, then you’ll love….’. Others that join Fallen on this shelf are: Hush, Hush by Becca Fitzpatrick, Beauty by Robin McKinley and The Host by (she-who-started-it) Stephanie Meyer. 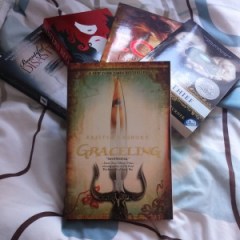 Since: March 2012
Currently sitting on the ‘Goodreads Made Me Buy It’ Shelf

I joined Goodread in 2012 and haven’t looked back since. Goodreads has pretty much inspired all book purchases since then. Graceling was one of the first books I saw and thought wow, sounds and looks amazing and has great ratings. Ok, I NEED IT! I will blame Goodreads for this shelf being the largest of all my metaphorical shelves. It also holds, Sisters Red by Jackson Pearce, Beautiful Disaster by Jamie McGuire, Eon by Alison Goodman and The Thief by Megan Whalen Turner. Bad Goodreads… 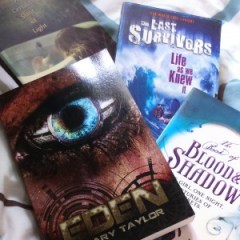 It may have only been recently that Amazon and Goodreads announced they were combining but I’m convinced they’ve been in cahoots for many many years. How else did Amazon always know just what to throw into my line of sight? Eden was one of those impulse buys that I thought I desperately needed at the time and yet still haven’t read… It’s kept company by A Certain Slant of Light by Laura Whitcomb, LIfe As We Knew It by Susan Beth Pfeffer and The Book of Blood and Shadow by Robin Wasserman.

19 comments on “Top Ten Tuesday: Ten Books That Have Been On Our Shelves From Before We Started Blogging That We STILL Haven’t Read”