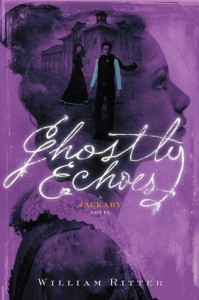 Thank you to Netgalley and the publishers for a chance to read this excerpt in exchange for an honest review!
Published: 13th of September 2016 (UK) – 23rd of August 2016 (US)

Abigail Rook and her eccentric employer, R. F. Jackaby, dive into the cold case, starting with a search for Jenny’s fiance, who went missing the night she died. But when a new, gruesome murder closely mirrors the events of ten years prior, Abigail and Jackaby realise that Jenny’s case isn’t so cold after all, and her killer may be far more dangerous than they suspected. Fantasy and folklore mix with mad science as Abigail’s race to unravel the mystery leads her across the cold cobblestones of nineteenth-century New England, down to the mythical underworld, and deep into her colleagues’ grim histories to battle the most deadly foe she has ever faced.

Oh how I love this series! It’s quirky, it’s funny and it’s so extremely clever! I didn’t think this series could improve on dragons (from Beastly Bones) but I was wrong. This is so much better!

In this third instalment we finally get some answers for Jenny, the ghost that lives with Jackaby and Abigail. We’ve known from the very beginning that Jenny had a very gruesome and traumatic death but no one had any idea why she was murdered or by who. In this twisted sequel we start to realise that Jenny’s death may be more important than we ever realised and that things we thought were consequential may in fact have been part of the plan all along!

Jackaby and Abigail continue their quest to find the pale man, the killer that has been causing them so much grief from the very start, but when they find him they find that he is just a puppet and soon they are chasing the strings hoping to find out who’s behind a complicated plan to destroy the world.

Ghostly Echoes is full of the witty banter we’ve come to love and expect from Jackaby. I was giggling to myself the whole way through. I love Jackaby’s flippant and optimistic attitude and how Abigail always steps in when she sees him getting flustered. It’s easy to see why they work well as a team. I was happy to see the return of Charlie and a few of the other characters we’ve met along the way. Included ones I never thought would re-appear. More importantly, I was ecstatic that Jenny played such a huge role in this book. I’ve been dying to know more about her and watching her transform has been the highlight of this book.

William Ritter has cleverly introduced many, many different supernatural elements along the way. In this book alone we have seen the introduction of Greek mythology and The Seelie and the Unseelie. I would have thought having so many different supernatural elements would have made this messy and confusing and yet it doesn’t! It’s cleverly explained and all ties together in a neat and understandable way.

This series has got darker and darker as we chase the powers behind all the trouble in New Fiddlesham and I can’t wait to see what happens next. Fingers crossed they find away to save the world and themselves!