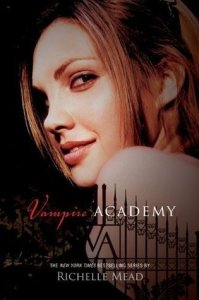 ‘I wished I could have a normal life and a normal best friend. Immediately, I cast that thought out. No one was normal, not really. And I’d never have a better friend than Lissa…’ p.165

With Vampire Academy’s upcoming release in the UK cinemas (April 2014) I thought it was about time I dusted off my copy and started reading. (Kerr and I have decided that as so many books are being made into films, and released this year, that we would alternate who will get to read the-book-before-the-film and who gets see the-film-before-the-book. She read Divergent so I get to read Vampire Academy.)

So I’ve finally got round to reading Vampire Academy. The book so many people have been raving about for years and I must admit I wasn’t disappointed.

St. Vladimir’s Academy isn’t just any boarding school—it’s a hidden place where vampires are educated in the ways of magic and half-human teens train to protect them. Rose Hathaway is a Dhampir, a bodyguard for her best friend Lissa, a Moroi Vampire Princess. They’ve been on the run, but now they’re being dragged back to St. Vladimir’s—the very place where they’re most in danger…

Rose and Lissa become enmeshed in forbidden romance, the Academy’s ruthless social scene, and unspeakable night-time rituals. But they must be careful lest the Strigoi—the world’s fiercest and most dangerous vampires—make Lissa one of them forever.

Richelle Mead had an easy and fluent writing style. I was a little apprehensive before I began because I read the blurb and thought, dear Lord this sounds complicated! How on earth am I going to understand all the different types of vampire! But Richelle Mead doesn’t’ overload you with information in huge clumps of boring back-story (like so many others in this genre). Instead she spreads it out, taking her time and balances all this information with witty sarcasm, which takes the form of the lead character Rose.

Rose was so kick-ass it was awesome! And I found the friendship/relationship between her and Lissa to be very realistic and heartfelt. They didn’t always agree but they cared so much about each other that it didn’t matter. It was nice to have a friendship at the heart of the book rather than a love interest. Although don’t think that means there wasn’t any because there was.

I liked that the males in this book weren’t ridiculously implausible. I usually find that in YA paranormal-romances the male love interest is usually either bad news, broody and totally obnoxious or drop dead gorgeous, the perfect guy, sparkles and all. But in this, the guys are just guys, (well vampire guys anyway). I liked Dimitri but I must admit I think I love Christian. The misunderstood guy always gets my heart. It was interesting experiencing both romances through one character, as Rose was connected to Lissa. Such a clever idea and well played through the book to allow us to see outside of Rose’s surrounding but without losing her snarky witticisms.

Overall I really enjoyed this book and I will be reading Frostbite as soon as possible!