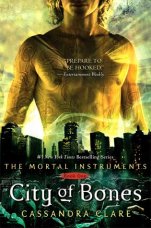 “‘Are you TRYING to get run over by a cab?’
‘Dont be ridiculous, we could never get a cab that easily in this neighbourhood.’”
-Page 162

When fifteen-year-old Clary Fray heads out to the Pandemonium Club in New York City, she hardly expects to witness a murder― much less a murder committed by three teenagers covered with strange tattoos and brandishing bizarre weapons. Then the body disappears into thin air. It’s hard to call the police when the murderers are invisible to everyone else and when there is nothing―not even a smear of blood―to show that a boy has died. Or was he a boy?

This is Clary’s first meeting with the Shadowhunters, warriors dedicated to ridding the earth of demons. It’s also her first encounter with Jace, a Shadowhunter who looks a little like an angel and acts a lot like a jerk. Within twenty-four hours Clary is pulled into Jace’s world with a vengeance, when her mother disappears and Clary herself is attacked by a demon. But why would demons be interested in ordinary mundanes like Clary and her mother? And how did Clary suddenly get the Sight? The Shadowhunters would like to know…

I first read this and the next two in 2011, before the 4th book was out. I’ve since collected the rest of the series and each series that came after and now is the time I’m getting around to reading them again! Mainly because of the TV show I have to admit. It taught me that I am a firm Malec shipper and that Magnus is fabulous and I need to learn everything about him and what better place than the original source?!

I found Clary quite annoying, to start off with at least. She hated Izzy because she was pretty and she didn’t use her brain! But I don’t know if she mellowed or if I did because of how little time I’ve had to devote to reading so far this month but I’m feeling far more favourably about her now, even if she did go off and forget about Alec! (I don’t think she actually did…she had other stuff to deal with).

I find this world quite deep and complex and I’m looking forward to learning more about it, both from the next two books as I continue my recap then all the books that come after that I’m yet to read. We’ve learnt little so far about everything, the shadow hunters, the downworlders, Idris, I’m looking forward to it.

I’d forgotten about Jace’s sense of humour and I’m so glad I’ve found it again, he’s fantastic! I’d also forgotten how hateful Valentine is too, what a horrid man. There was also much more to Simon than I remembered too. But Magnus is my favourite character. Can I admit that yet? Was he in this book enough? I’m confused…I’ve been reading excerpts online and I’ve introduced a friend to Shadowhunters while reading this as well as watching the film, all the Magnus is amalgamated into a giant ball of fantastic in my brain…