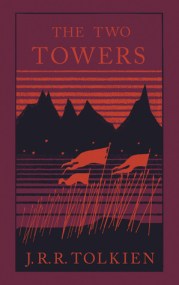 Frodo and the Companions of the Ring have been beset by danger during their quest to prevent the Ruling Ring from falling into the hands of the Dark Lord by destroying it in the Cracks of Doom. They have lost the wizard, Gandalf, in the battle with an evil spirit in the Mines of Moria; and at the Falls of Rauros, Boromir, seduced by the power of the Ring, tried to seize it by force. While Frodo and Sam made their escape the rest of the company were attacked by Orcs.

Now they continue their journey alone down the great River Anduin – alone, that is, save for the mysterious creeping figure that follows wherever they go.

Ah, that’s better! Much more interesting than The Fellowship of the Ring. Usually it’s book 2 that’s the least interesting rather than book 1, but I guess if you count The Hobbit as book 1 then that all makes sense…anyway…

Again, this was an audio book. I’m really not sure I’d be able to read these books in book form at least not without missing out large sections where it sort of rambles. Certainly I would’t have read through the songs – I think I said this before, there are a lot of them!

I really enjoyed meeting Treebeard in this story. He was terribly amusing and fascinating as a character. I enjoyed the time Merry and Pippin spent with the Ents probably as much as they did. Meeting Boromir’s brother was a surprise and the ending wasn’t something I remembered from the adaptions that I know! Sam seems to keep more things to himself too, but that makes sense, when you’re trying to get across his inner thoughts that were originally from a part of the book that was in his point of view it’s sometimes the only way to do that is to have him say them. Also, his relationship with Frodo makes a tiny bit more sense, but as I’m only 2/3 OR 3/4 through the story I know there’s more to happen.

I didn’t realise that they got so far in the second book, but then I guess the books are told in parts, so some of this might even be happening at the same time as some of the next book which is even longer than this! But I know there are perils yet and I’ll get through them with the rest of them.

Suspicions ran weirdly in this story, I don’t know why I noticed it or how I expected it to be or even how it is in other books, but there seemed to be a lot of  ”I don’t trust you!” “But I am this person.” “OH! Well ok then.” Maybe I was just missing the proof – a downside to audio perhaps. Still it’s quite amusing.