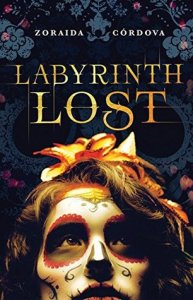 I fall to my knees. Shattered glass, melted candles and the outline of scorched feathers are all that surround me. Every single person who was in my house – my entire family — is gone.

Alex is a bruja, the most powerful witch in a generation…and she hates magic. At her Deathday celebration, Alex performs a spell to rid herself of her power. But it backfires. Her whole family vanishes into thin air, leaving her alone with Nova, a brujo boy she can’t trust. A boy whose intentions are as dark as the strange markings on his skin.

Beautiful Creatures meets Daughter of Smoke and Bone with an infusion of Latin American tradition in this highly original fantasy adventure.

This was amazing. Just what I needed to get me ready for the run up to Halloween. It’s like a Latin American Alice In Wonderland mixed with Beautiful Creatures.

Alex is a Brooklyn Bruja, a witch. Magic has flowed through her families blood for generations but Alex hates magic and would do anything to get rid of her powers. On her DeathDay she decides to ask the spirits to rid her of her powers but it all goes wrong and all of Alex’s family are sucked into the in-between, a place called Los Lagos. Alex must travel across Los Lagos with the help of Nova and Rishi and free her family before it’s to late!

Labyrinth Lost was full of beautifully detailed Latin American infused magical history. It really gave a wonderful sense of place and drew me into the story. There was great pace and development throughout, and when we entered Los Lagos I was blown away by the world I found myself in and all the magical creatures that inhabited it.

The Meadowkin were my favourites of all the magical creatures. We met them at a never ending dinner party but there was something sinister underneath the happy, laughing gathering. It was creepy and left me unable to trust anything! Illusions seemed to mask everything in Los Lagos and the three characters we follow were constantly having to look at everything twice to see through the deceptions. A very clever concept that I really enjoyed.

I wasn’t a big fan of Alex. I found her a bit too whiny and self-absorbed. She never seemed to consider the consequences to anything she did and then blamed others for the outcome. It’s difficult to enjoy a book when you don’t like the main character but somehow I did, and I think that is all thanks to the secondary characters and the plot itself.

I wasn’t aware of the F/F relationship when I picked this up but it was a wonderful surprise. I can’t say it was the most moving and exciting relationship I’ve ever read about. At times it felt a little forced and Alex seemed easily distracted by Nova. It was easier to believe that a relationship was brewing between Alex and Nova than Alex and Rishi because there seemed to be more looks and feelings passing between them. For me, Alex didn’t seem to have feelings for Rishi in that way, not until the very end, as she always talked about her as a friend.

Rishi however was much more clear with her emotions. The way she looked at Alex, talked to Alex, touched Alex made me smile and see how much she loved her. It’s sad that I didn’t feel the reciprocation of this because it could have been a wonderful relationship otherwise.

Even with these few issues I would definitely recommend this to anyone. especially if you want something similar to Splintered by A G Howard. Labyrinth Lost has a wonderful concept with some really likeable characters and I’m really looking forward to the next book.