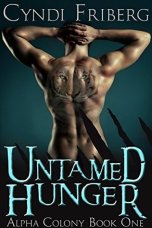 “I’ll have to disappear before he realises what we’ve done.”
“That’s not an option. You’re the only ally the morphs have. It would be devastating to their cause if they lost you and your connections.”
- 84%

Major Sasha Young has been stationed at Alpha Colony for the past three years, part of an elite military team assigned to maintain order and resolve conflicts between the shapeshifters. She has watched the hostile morphs, secretly fascinated by their predatory grace and animal magnetism. The colonies were established to protect defenseless humans from these genetic anomalies. So why does she feel like the morphs are the ones being victimised?

Grant Evans, a rare white-tiger shifter, is frustrated and appalled by how little their human handlers understand the average “morph.” After an especially violent altercation between leopard and tiger shifters, he decides it’s time to educate them. He’s had his eye on Sasha ever since she arrived at Alpha Colony and introducing the feisty beauty to the full potential of a felidae-morph is going to be his pleasure — and hers!

From Cyndi: The Alpha Colony series has always been a fan favorite and I’m hoping the re-launch will introduce these highly sensual paranormal stories to some new readers. This series is set in the near future and features shapeshifters, primarily feline but I throw in a wolf-shifter or two.

I read this as part of my unofficial kindle clear out challenge. Yay! One more book down!

This reminded me a lot of the Breeds series by Lora Leigh to be honest – prejudice against this type of shape shifters, though this was shorter and seemed to flow more smoothly in comparison. This concept seemed less complex but more captivating as a whole, perhaps because we’ve given less information to start with or because this seems to open more in the middle.
Finishing this book where it did means that there’s a lot of unresolved issues floating about however! There was no needless conflict, it’s true, but it was also more focused on the sex than the actual issues and storyline which were actually pretty fascinating and if not well written in, certainly very well thought out. It started off ok, it was all part of the plot, but then it felt like it was getting shoe-horned in almost and that really didn’t help it. I’d like to know more about this world and the situations within it, but I can see this being a pattern and there seems to be only one other book. This concept needed a more in depth back story to really get it off the ground. Book 2 doesn’t quite follow on either and if it’s the same length then I think I’ll end up more frustrated rather than less by the end of it all so I think I’ll pass. Originally I thought it wasn’t available, but then I discovered that the author switched names so that makes sense.

One thing that really rather bothered me was the topic of hair. Or in one particular case, the lack thereof. I’m not sure how this is meant to be sexy, looking like a pre-pubescent child. It’s actually pretty creepy and not an easy to maintain habit. Not to mention it’s actually pretty unhygienic, so that was also pretty distracting too.
And while we’re on the topic of hair, the grandfather’s hair ‘insisted on curling despite all the products’. Too darn right it did! It’s his natural texture and it’s damned well fed up of being suppressed! You rock those curls grandpa!