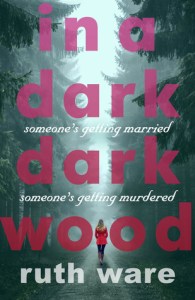 Nora hasn’t seen Clare for ten years. Not since the day Nora walked out of her old life and never looked back.

Until, out of the blue, an invitation to Clare’s hen party arrives. A weekend in a remote cottage – the perfect opportunity for Nora to reconnect with her best friend, to put the past behind her.

But something goes wrong.

And as secrets and lies unravel, out in the dark, dark wood the past will finally catch up with Nora.

In A Dark Dark Wood is a intense, captivating and absolutely chilling mystery thriller which had me glued to my seat for the whole day! I couldn’t put it down.

Nora is surprised to be invited to Clare’s hen do. She hasn’t seen her in ten years, and Nora’s departure wasn’t exactly under the happiest of circumstances. But Nora is intrigued and agrees to go, trekking across the country to a remote cottage in the middle of no where for a reunion with a past she had thought she’d never have to face again.

The narrative voice is really interesting. In some ways Nora is really easy to relate too and I liked her immediately but I never felt I could trust her. For some of the book Nora has amnesia and with her lack of memory and other characters reporting things slightly differently it is easy to start to doubt her. This only intensified as I realised she was keeping huge secrets from us and she’s not the only one! I felt uneasy thoroughout as all the characters seem to be hiding something and it made for a rather paranoia fueled read!

This book was full of tension. It bounced backwards and forwards between flashes of Nora running through the woods covered in blood and the gathering of this confusing and untrustworthy group of characters. It took me a while to figure out what order these events happened in and I thought that was really clever because it mirrored what Nora was going through.

I had kind of figured out what was going to happen and who was behind it all but I wasn’t sure why. So I was left waiting till the very end for the big reveal which turned out to be rather clever and terrifying at the same time. I just can’t believe how twisted and irrational it all was. It was fantastic!

I would definitely recommend this to anyone looking for a new mystery thriller, especially fans of Agatha Christie. It’s easy and quick to read which is important to me because I hate long draw out thrillers as they makes me anxious and grumpy.