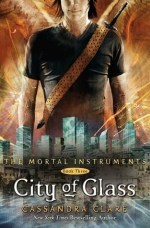 “I don’t remember the Clave inviting you into the Glass City, Magnus Bane.”
“They Didn’t. Your wards are down.”
“Really? I Hadn’t noticed.”
“That’s terrible. Someone should have told you. Tell him the wards are down.”
- Page 237-238

To save her mother’s life, Clary must travel to the City of Glass, the ancestral home of the Shadowhunters – never mind that entering the city without permission is against the Law, and breaking the Law could mean death. To make things worse, she learns that Jace does not want her there, and Simon has been thrown in prison by the Shadowhunters, who are deeply suspicious of a vampire who can withstand sunlight.

As Clary uncovers more about her family’s past, she finds an ally in mysterious Shadowhunter Sebastian. With Valentine mustering the full force of his power to destroy all Shadowhunters forever, their only chance to defeat him is to fight alongside their eternal enemies. But can Downworlders and Shadowhunters put aside their hatred to work together? While Jace realizes exactly how much he’s willing to risk for Clary, can she harness her newfound powers to help save the Glass City – whatever the cost?

Love is a mortal sin and the secrets of the past prove deadly as Clary and Jace face down Valentine in the third installment of the New York Times bestselling series The Mortal Instruments.

We do find out what the Inquisitor said to Jace, YAY!

I remember the last time I read this book, I wondered why it didn’t end here, it has a good ending place going on and everything! I sort of wondered if this wasn’t the reason I didn’t pick up the next book when it came out a month later. Maybe I was just annoyed with Clary, because I think she gets more stupid not less, correct?

I discovered a lot in this book that I thought I’d ‘spoiled’ for myself with pinterest spoilers. Turns out a lot of them weren’t in books 4-6 as I assumed and I was just re-learning them! Oh well.

This is a good book for Malec fans! Though you have to pay attention to the little details or you’ll miss a lot of it! haha. Magnus is so sassy and I really want to customise myself a Magnus Funko because for some stupid reason they don’t have book ones! (Do they know how much more money they’d make?!) So, keep an eye on the Make it Mondays just in case it works! haha but moving on

I wonder if I’m less annoyed with Clary this time because I’ve been focusing more on everyone else around her. I don’t like to hate on her, but she really needs to re-evaluate her morals. When Jace was shouting at her to get her to go away he was pretty accurate, though later he said he was talking about himself which confused me. That poor guy breaks your heart. He has such a bad time of it and he believes such horrid things about himself that are so untrue. How he’s able to be so wrong is something I don’t get. “I’m a complete monster- DON’T HURT THAT KITTY!!” Yeah, whatever Jace, evil monster, got it. And I bet it doesn’t get better till the end for him though, because why would it!?

In this book we get to go to Alicante (The Shadowhunter’s home country – not the Spanish city) and we learn a lot more about our characters and their world. They also manage to change some pretty big things too and I’m looking forward to the changes that are going to be in the next book, now that I’m no longer focusing on Clary. (Man I wish she was more like her film alter ego…she seemed more sensible.) There were some pretty major plot points in this and I hope we get a more indepth explanation of them in the next 3 books. We don’t really NEED them exactly – as I said, this could have been the end, with a nice little epilogue to round it off, but because we have 3 more books, I’m going to expect them. What comes next has to be pretty big to compete and not leave everyone disappointed. Am I setting myself up to be disappointed with big expectations? Perhaps, but I know a few important outcomes go exactly where I want them to, so it can’t be all bad.