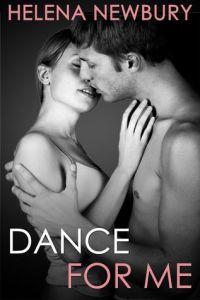 *copy provided by the author, in exchange for an honest review, via Goodreads Firstreads scheme*

Natasha is one of the most promising ballet dancers at the prestigious Fenbrook Academy of Performing Arts and she’s just landed a life-changing audition. But no one knows the guilt she carries…or the damage it makes her inflict on herself when she’s alone.

Darrell is a multi-millionaire designer at 25. But past traumas have pushed him into isolation and the intense pressure of his work has brought him to the edge of burnout. Seeking inspiration, he sees Natasha dance and hires her as his muse.

As she dances for him, the two become entwined in a passionate but troubled relationship. He starts to see the pain inside her and helps her gradually lower her defenses…but Darrell has demons of his own. Can two broken people save each other? Or will the darkness they’re hiding consume them both?

This New Adult Romance is recommended for 17+ due to mature themes, sexual situations and language

I think I would have enjoyed this book much more if I hadn’t read some ridiculously good contemporary romances recently. Dance for Me is about a ballet dancer called Natasha who has a terrible secret in her past. A secret that causes her to self-harm and believe that no one could ever love her. That is until she meets the ever so sexy, Darrell. Darrell designs military weapons for ludicrous amounts of money. So not only is he fit but he’s rich too, but he is also damaged. Can Natasha and Darrell save each other?

The plot was quite basic but enjoyable with some rather steamy scenes keeping the pace going. I wasn’t entirely convinced by the idea of a millionaire playing around with missiles in his basement especially a millionaire that’s only 25 years old. It just seemed a little bit far fetched and when he first meets her and asks her to dance for him I couldn’t help but cringe, because seriously who does that? I personally don’t understand why being ‘Hot’ allows you to ask things like that and get away with it. I think I would have run a mile! But then the story wouldn’t have gone anywhere if she yelled ‘Get away, you creep!’ and ran off would it…

Ok so maybe the plot lacked some believability but what it lacked in realism it made up for in angst and romance. I really liked the way Natasha was portrayed especially her self-harming aspects. It wasn’t easy to read, or easy to understand but you got the idea that she didn’t really understand why she did it either, only that she needed to. I would have also loved to see more of her friend, Clarissa and Darrell’s friend, Neil because they were quite amusing.

All in all, a cute, short contemporary romance that makes a great little time filler.