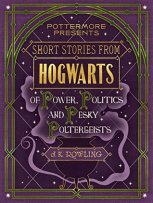 ” ‘ [a] Reactionary who attempted to close down the Department of Mysteries, which ignored him.’ ”
- 31%

No Muggle Prime Minister has ever set foot in the Ministry of Magic, for reasons most succinctly summed up by ex-Minister Dugald McPhail (term of office 1858-1865): “their puir wee braines couldnae cope wi’ it.”’ – J.K. Rowling
Pottermore Presents is a collection of J.K. Rowling’s writing: short reads originally featured on pottermore.com with some exclusive new additions. These eBooks, with writing curated by Pottermore, will take you beyond the Harry Potter stories as J.K. Rowling reveals her inspiration, intricate details of characters’ lives and surprises from the wizarding world.

These stories of power, politics and pesky poltergeists give you a glimpse into the darker side of the wizarding world, revealing the ruthless roots of Professor Umbridge, the lowdown on the Ministers for Magic and the history of the wizarding prison Azkaban. You will also delve deeper into Horace Slughorn’s early years as Potions master at Hogwarts – and his acquaintance with one Tom Marvolo Riddle.

Harry Potter histories! Done wrong and this kind of thing can bore the pants off a wombat. Not that wombats wear pants, I have no idea why I chose that particular simile but totally rolling with it…
Done right it looks something like this.

I love back stories and little insights and titbits like this! they almost always round out stories so nicely. Many people are unaware of exactly how much story there is not in a story unless they’ve ever tried their hand at writing either for themselves or a purpose. With nothing extra out and around it, a story can be pancake flat. Sometimes the best stories a 3 times bigger than what’s in the books. You need the history there to give the character dimension but the reader doesn’t NEED to know it all. Of course when the writer is someone with JK’s sense of humour, why would you NOT want to?!

So many brilliant bits in this book alone. What stood out the most for me is how it shines more light on the “Wasn’t a wizard or witch who went bad who was’t in Slytherin” rumour too. I find this fascinating, I’ve seen rants about how people are annoyed with the anti-Slytherin prejudice. What’s interesting is that the prejudice is book based and by that I mean, it’s part of the story, it’s something created within the world of Harry Potter. Outside of the world it’s ridiculous to us but outside of our world, racism would look pretty freaking stupid (especially as we’re all one RACE) [actually, it looks pretty freaking stupid IN our world, but I digress]. This gives us some more detail about certain someones and it shows just how clever JK has been with it all. One someone is in Slytherin despite not having the supposed correct parentage (how many actually do?!), two heroes mentioned were in Slytherin and a wizard that went pretty bad was shown to be a RAVENCLAW [traitor!].