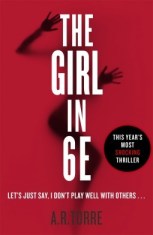 “You have to realise that while prison would be a good thing for me, it’d be a very bad thing for my obsession. See, there are a lot of people in prison. And they wouldn’t be able to run far.”
-Page 53

Deanna Madden, aka Jessica Reilly, hasn’t touched another person in three years. She hasn’t left her apartment. She makes money from performing to webcams on a sex site, where her clients pay $6.99 a minute for her time. She’s doing alright. The dollars are piling up in the bank. She’s the number 3 model on cams.com. And she hasn’t killed anyone for years. But when Deanna sees on the news that a little girl called Annie has gone missing, the story rattles her carefully ordered world. It’s uncomfortably similar to the dark fantasy of one of her most disturbing online clients. She’s convinced he’s responsible for the girl’s abduction – but no one will listen to her. So, after three years, Deanna finally leaves the apartment. And this is what happens…

I don’t know if I’ve just been reading really bad books lately (Bwahaha! What books?!) but this one has been the best I’ve read in some time!! I was attempting to read Dear Killer and I didn’t get too far – this was everything Dear Killer wasn’t, which shouldn’t be surprising as they have vastly different target audiences.

Deanna/Jessica is a really interesting character, she’s convinced she’s a danger to society. She really wants to kill people, any people, but at the same time she doesn’t because she’s locked herself away and she has all sorts of things in place to prevent her from going out.
I quite liked Jeremy too, though I wasn’t sure about their first actual meeting and his behaviour…

I loved how this book was written. We go from her clients to another character to her past to something that’s happened then we back track for a bit, which sounds like it should be horribly confusing. It SHOULD, but somehow it’s really not! It must be witchcraft…
It was sort of a nicely paced slow build but it also had a fast paced not-TOO-fast-paced feel as well. Which is just more magic.

I can’t have had the book long, it was published in 2014 according to my copy and I was sure that I got it when I hard it was being made into a film and I thought it would be a good idea to read the book first (rarely a bad idea). How’s the film coming, anyone know? Google is vague…anyway, it feels like I’ve had it for YEARS and I’ve chosen to read it now because it is October and I NEVER read Halloweeny reads around Halloween because Halloween happens and then I realise it’s Halloween…And I know this isn’t really Halloweeny, but it’s morbid! It’s close enough for my first try!

I totally recommend this book! The sex talk is quite detailed, adult consensual sex talk. Apart from that I don’t think that there’s anything that needs ‘warning’ but then I seem to be desensitised to some things so don’t hold it against me.
This is the first of a series but I’m not sure about the series, I’m concerned about what will happen but at the same time I really want to keep gong…Any advise?