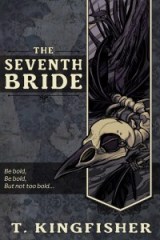 “But it is somehow easier to face things when someone else is there.
Courage still does most of the heavy lifting,
but Pride gets its shoulders in there, too,
just to keep you from embarrassing yourself in front of the other person.”
- 17%

Rhea is an ordinary miller’s daughter, engaged to be married under suspicious circumstances to a man not of her choosing. He has unknown powers and a manor house full of mysterious women.

Rhea has a hedgehog.

It’s probably not going to be enough.

For a slightly less vague blurb have some more information:
“At 15 Rhea is oddly engaged to be married to a powerful man. When she reaches his house she discovers he already has 6 other wives and a dark purpose. Luckily she’s got a few interesting friends.”

Ok, so that’s vague too, but if you put them together you pretty much get the whole plot! I’m not sure what the retelling tag is all about, but we’ll go with it.

I found this story dragged to start with and I kept looking at the % bar to see how much longer I had left. Then, when things got going I was sad that it all ended with less explanation than I was hoping! I always hope for more explanation. I like things to be spelled out for me. Like with the hedgehog! How could she not be, but maybe be, not quite, almost someday?

I found each wife interesting, but a little more back story would have been fantastic. The science of the world would have been grand too. The cover lead me to believe it would be a lot more spooky than it was, it was more creepy – not in a good way- than I was thinking too. I’d have loved a shorter intro and more of a middle, just to make it super freaky. I don’t know, maybe I’m still in a Halloween mood?

It put me in mind of “The Paper Magician.” and I really must finish that series…