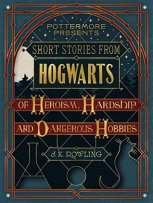 ‘Minerva was the Roman goddess of warriors and wisdom. William McGonagall is celebrated as the worst poet in British history. There was something irresistible to me about his name, and the idea that such a brilliant woman might be a distant relative of the buffoonish McGonagall.’ – J.K. Rowling

Pottermore Presents is a collection of J.K. Rowling’s writing from the Pottermore archives: short reads originally featured on pottermore.com with some exclusive new additions. These eBooks, with writing curated by Pottermore, will take you beyond the Harry Potter stories as J.K. Rowling reveals her inspiration, intricate details of characters’ lives and surprises from the wizarding world.

These stories of heroism, hardship and dangerous hobbies profile two of the Harry Potter stories’ most courageous and iconic characters: Minerva McGonagall and Remus Lupin. J.K. Rowling also gives us a peek behind the closed curtains of Sybill Trelawney’s life, and you’ll encounter the reckless, magical-beast-loving Silvanus Kettleburn along the way.

Well that was thoroughly enjoying! And also pretty sad.

We end up learning a lot about Dumbledore in the books but we never really think about McGonagall. In here we do, we also learn about her friendship with Dumbledore and how it’s got to do with them being a similar type of people.

My favourite was reading about how to become an Animagus and imagining James, Sirius and Peter going through it (I want to read this, by the way, so please write it, Jo, please?). I always wondered why it took them so long to become animagi and now I know!

Most of Lupin’s story wasn’t new, but seeing it from the other side was fascinating too. I think he’s a massively undervalued character and I think that the fact that he is just 100% justifies his existence right there. I was looking forward to hearing more about the antics at school and the others, but that was purposely vague or absent and this made me sad. The Marauders are just so fascinating and I need to know more!!

It was also interesting to see what JK had on Trelawney she was a Ravenclaw!!! And also Kettleburn because I’ve never been interested in him. Turns out his job is possessed by a person of a particular attitude! Also, he was a Hufflepuff. I know what you’re thinking, ‘But where’s the Slytherin??!’ Don’t be down hearted! I accidentally read book 2 first and I can tell you exactly where the Slytherin is! A whole bunch of them actually, some were nasty but some were spectacular heroes. So why are they there and not in the heroes book? Because their stories come under power or politics. Stop complaining and go see.

My review for book 2 can be found HERE.