This is a top ten organised by www.brokeandbookish.com (a weekly link-up in the community).

1. I can’t seem to stop myself from buying new books.

I’ve tried really hard to curb my book buing ways and yet some how I always seem to find a reason for needing to buy more books. I even had a £10 monthly budget for myself this year and I just became more inventive with my excuses as to why I really needed that particular book! 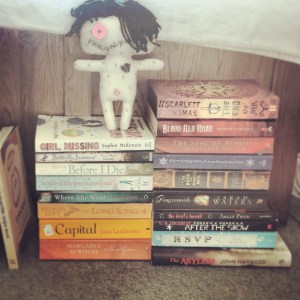 2. Nearly every book I have ever borrowed from the library, goes back unread.

I know this sounds terrible but I always borrow books from the library thinking this sounds great and yet some how many of the books I get out end up unread. If I do actually read them I usually find that I have had to renew my return date to the maximum.

3. I have stolen (not purposefully – I will explain) at least 3 books from the library.

The books that come to mind are: (I’m counting these as confessions)

4. Milly Molly Mandy Again by Joyce Lankester Brisley – from my Primary School Library – I must have been 9 at the time and I had loved the first book (Milly Molly Mandy). Miss King a TA had found book 2 for me in the library but had forgotten to book it out for me. She gave me the copy to take on Summer Holiday with me and I was so happy. I read it within the first week and put it on my shelf. Now I know this is no excuse but as a tiny person with 6 weeks holiday ahead of me I was just so excited by all the things we had planned over the holidays that by the time I went back to school I’d  completely forgotten about the book. I didn’t actually find it again till after I had finished Primary School.

5. The Crush by Alex Shearer – from my local library – this was more a keeping quiet steal. I borrowed this one just before the library was refurbished and when I took back my other books – knowing that I would have a fine on this one – I asked if I had anything to pay or outstanding and they said No. I asked if they were sure they said Yes. So I kept quiet and kept it. (I will admit this is one of those library books that I still haven’t read.

6. Nameless – This one I can’t remember at all what it was called or who wrote it! but I remember I was given it as part of the Carnegie Prize awards – I can’t even remember which year as I joined in with quite a few of these. As these weren’t booked out and in, I was convinced I had given it back. The Librarian and I had many an argument regarding this book as she was sure I still had it. I did not like being called a liar and eventually she decided that I must be right. Well imagine my embarrassment when 2 years later I discovered it in a box while gutting my room. By this time I had left my high school. I asked my brother in the end to take it in for me and Mrs Lowe (the librarian – sent me a note saying ‘I knew you had it – but thank you for returning it’) – Ok so this one was just borrowed for a very long time…

So in a Black and White way I stole two of these but in the grey you could say I obtained then in an unofficial way.

I didn’t read for quite sometime between high school and University and must admit that it was the Twilight Saga that got me back into reading. I loved the books and the films. I loved the films so much that I made my boyfriend, Brother, male house mate and my boyfriends sister join me in a 12 hour Twilight-athon at Cineworld when the last film came out. We took blankets and pillows and wore onesies

Still one of the best cinema experiences of my life! 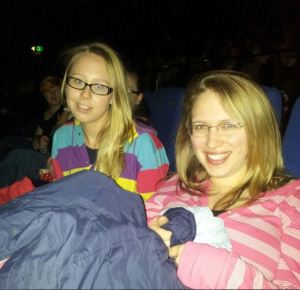 8. I stress when recommending books.

I care (possibly too much) about what people think and so find recommending a book to someone, especially one I love, to be quite stressful. I feel like I’ve opened myself up to someone and I’m scared they will hate it and think what on earth is this girl on???

9. I always judge a book by its cover.

I really do. I don’t know why but an ugly cover does put me off a book. I know it’s stupid. I feel so disgusted with myself for even saying it out loud.

10. I HATE series that NEVER STOP!

I think the thing that annoys me the most is when a series feels like its come to a conclusion and yet the Author just doesn’t know when to stop! Currently my hate is directed at you J K Rowling! Leave Potter Alone! It’s finished, don’t ruin a good thing! But she’s not the only one that makes my blood boil… Others include… Gena Showalter, don’t get me wrong I love her Lords of the Underworld series but seriously how many more Lords are just going to appear and have a sexy romp with a mortal! And always the same sex… tut tut. And then there’s those who take the same story and just write a Novella from the other characters POV… To name and shame a few… K A Linde (I don’t want to know what Jack was actually thinking, I liked my version), Jennifer L Armentrout and you know what, I’m gonna stop there cos I’m getting annoyed.