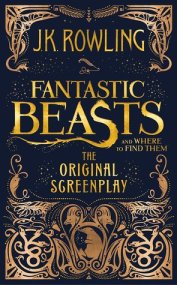 When Magizoologist Newt Scamander arrives in New York, he intends his stay to be just a brief stopover. However, when his magical case is misplaced and some of Newt’s fantastic beasts escape, it spells trouble for everyone…

Fantastic Beasts and Where to Find Them marks the screenwriting debut of J.K. Rowling, author of the beloved and internationally bestselling Harry Potter books. Featuring a cast of remarkable characters, this is epic, adventure-packed storytelling at its very best.

Whether an existing fan or new to the wizarding world, this is a perfect addition to any reader’s bookshelf.

Aww, the film is coming out Friday and I’m excited! I’m excited because it’s Eddie Redmayne, because it’s about a HUFFLEPUFF and they were neglected a little in the other films and because it’s not got an ‘original book’ to be compared to. It’s all it’s own merit.

I’m also excited about adding this to my Harry Potter shelf! Nearly more candles and Funkos than actual books! (‘m exaggerating. I think.)

I don’t know how I’ll get on reading a screenplay, I’ve not read Cursed Child yet, I DO hope to re-read my books over Christmas, but then I hoped that last year.

Are you excited for the film? What are you looking forward to most?