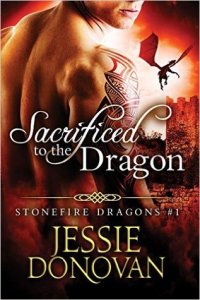 In exchange for a vial of dragon’s blood to save her brother’s life, Melanie Hall offers herself up as a sacrifice to one of the British dragon-shifter clans. Being a sacrifice means signing a contract to live with the dragon-shifters for six months to try to conceive a child. Her assigned dragonman, however, is anything but easy. He’s tall, broody, and alpha to the core. There’s only one problem—he hates humans.

Due to human dragon hunters killing his mother, Tristan MacLeod despises humans. Unfortunately, his clan is in desperate need of offspring to repopulate their numbers and it’s his turn to service a human female. Despite his plans to have sex with her and walk away, his inner dragon has other ideas. The curvy human female tempts his inner beast like no other.

NOTE: This is also available in parts so if you’re purchasing it please make sure its the full version because I bet there are some mean old cliff-hangers in the 4-part splits.

I really enjoyed this paranormal romance. It’s been a while since I’ve read one and while the beginning was a little daunting and there was a small whiff of insta-love, I’m happy with how the story progressed and how strong and independant the lead female was.

Melanie Hall lives in a world where dragon-shapeshifters exist along side humans. In the past humans hunted these shifters to the edge of extinction before they discovered that their blood held magical properties that cured nearly all human diseases. Now there is an uneasy truce between the two sides, a truce that involves sacrificing your body to the dragons to help them repopulate the shifter-race. Pretty much prostitution if you ask me, but I was willing to go with it… and I’m glad I did.

Melanie Hall is partnered with Tristan, a head strong dragon-shifter who hates humans after they killed his mother and deeply traumatized his sister, Arabella. Tristan is determined not to like Melanie but ‘do-his-duty’ for his clan and move on. But what he wasn’t counting on was Melanie’s quick wit and fiery personality. Melanie surprises Tristan and the chemistry between them is undeniable.

Obviously most of the story is focused on the romance and I can’t deny it was HOT! There’s always something exciting about two very strong characters clashing and then finally falling for each other and this story had it in spades! Melanie and Tristan were perfect for each other because they were both strong willed and passionate. I found the use of the F-Word all the time though, a little vulgar. I think it’s just because I would just call it sex… but that’s really just personal preference. Overall this romance was strong and developed quickly but effectively.

All in all a great paranormal romance!