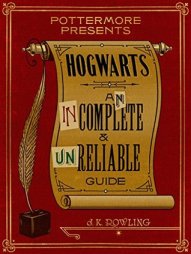 “The Marauder’s Map is lasting testimony to the advanced magical ability of the four friends who included Harry Potter’s father, godfather and favourite teacher.”
- 34%

‘The Ministry of Magic felt strongly, however, that to construct an additional wizarding station in the middle of London would stretch even the Muggles’ notorious determination not to notice magic when it was exploding in front of their faces.’ – J.K. Rowling
Pottermore Presents is a collection of J.K. Rowling’s writing: short reads originally featured on pottermore.com. These eBooks, with writing curated by Pottermore, will take you beyond the Harry Potter stories as J.K. Rowling reveals her inspiration, intricate details of characters’ lives and surprises from the wizarding world.

Hogwarts An Incomplete and Unreliable Guide takes you on a journey to Hogwarts School of Witchcraft and Wizardry. You’ll venture into the Hogwarts grounds, become better acquainted with its more permanent residents, learn more about lessons and discover secrets of the castle . . . all at the turn of a page.

I didn’t like this as much as the first one which I read second, just to confuse you. It was still fantastic though! This one was about Hogwarts itself. Not only do we learn what a Hatstall is, but we learn if we know any. Sounds complex but it really is what it says on the tin!

We also learn a little  tiny bit of one Peter Petigrew. From what I remember it’s sort of a throwaway line but it does tell us so much, especially when you think back to what was said about Neville Longbottom (I believe) in one of the previous novellas (on which subject – you’ll see what I mean when you pick up the line).

And WE LEARNT ABOUT HUFFLEPUFF DORMS! Why is this important? It’s the only one not in the books. I also have many Hufflepuff friends. (In case you didn’t know, I’m a Ravenclaw!)

It opens on the train station and  talks about problems the wizarding world would have had building a whole new one!

But my favourite bits were about how JK felt about these things and how she accidentally wrote herself into, and then had to find a way out of, out of problems. I always like a little insight into the writers – as one of my hobbies is writing. It’s been something to pique my interest a little more this month than last as it’s National Novel Writing Month this month and I’m writing again for the first time in ages! So JK’s comments and reasons were extra interesting when I read them.