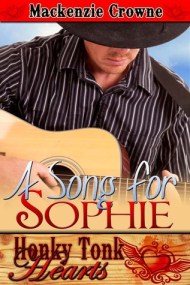 “Just how did you manage to get him to settle down enough to fall asleep?”
“I talked about myself. Apparently my life interests are enough to put even the most agitated of people into a coma.
- 25%

Jobless, practically homeless, and tired of being manless, Sophie Taylor jumps at the chance to be Beaumont Walker’s personal assistant. Six weeks on the road with country music’s bad boy–and, more importantly, his all-male crew–is the perfect opportunity to change her life.

Beau Walker doesn’t need any more distractions. Sophie, with her butt-ugly suits and balls-to-the-wall attitude, shouldn’t be one, but she proves to be distracting and more–even, surprisingly, a friend. So when he discovers her plan to snag a man from his worldly wise crew, he’s determined to protect her from herself.

When Sophie realises Beau is behind her failure to attract even one member of his crew, the last place she expects to find herself is in his bed. But will one night of passion convince her she’s woman enough for him? Or will it destroy their friendship and his budding belief in true love?

I’ve spent a good quantity of my week in crawling or stationary traffic, so it’s been a good week for e-book clearing out! After a long day I was after something that wasn’t too complex and this was in the “200 pages or under” list, so I read it.

It was a cute story though I honestly thought it was going to go very wrong not too far in. And by horribly wrong I mean be a terrible book. Why? Because of how Sophie was first described through Beau’s eyes, he was dismissing her because he didn’t find her attractive and it annoyed me. Then an early reference to her plainness included frizzy curly hair from her own point of view got on my nerves because frizzy hair is often used as an ugly ‘before’ and silky smooth and straight hair is the after [and being a curly girl you can see why this could be something I'd find insulting]. But what made it all ok was Beau sensibly realised they were curls and was a fan. And while the ‘expensive products’ wouldn’t really do much unless they were the right type, I was so happy to have this kind of scene in a book!

There was the usual not-talking-to-each-other and misunderstanding-leads-to-bust-up moments, but they are apparently key for any romance. This one was a short book so they were over quickly so they weren’t too bothersome to be honest. And there was a pretty sweet ending even if there was a sudden turn around!