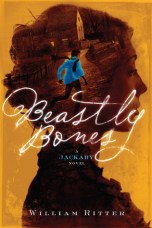 I’ve found very little about private detective R. F. Jackaby to be standard in the time I’ve known him. Working as his assistant tends to call for a somewhat flexible relationship with reality . . .

In 1892, New Fiddleham, New England, things are never quite what they seem, especially when Abigail Rook and her eccentric employer, R. F. Jackaby, are called upon to investigate the supernatural. First, members of a particularly vicious species of shape-shifters disguise themselves as a litter of kittens. A day later, their owner is found murdered, with a single mysterious puncture wound to her neck. Then, in nearby Gad’s Valley, dinosaur bones from a recent dig go missing, and an unidentifiable beast attacks animals and people, leaving their mangled bodies behind. Policeman Charlie Cane, exiled from New Fiddleham to the valley, calls on Abigail for help, and soon Abigail and Jackaby are on the hunt for a thief, a monster, and a murderer.

I wasn’t as wowed with this as I could have been and I think it’s probably because I read the second half right after seeing Fantastic Beasts and that was some kind of amazing right there. No creature in print could match up to those visuals!

That aside, this was still an interesting book. It starts off almost exactly where Jackaby finished. They head off to investigate the cat-fish and fall into another adventure. Luckily it’s mostly set out side of the city or they’d really start to get a reputation…
I like the way these stories are told and some of the little bits that are said so straight faced but are actually hilarious to the outside world – it’s these bits that cause it to be compared to Doctor Who. The story was pretty clever in the end, even though the bones weren’t what I wanted them to be. I was annoyed that they got the type wrong though!
(This is something that peeves a friend of mine and it’s now all her fault that I notice this kind of thing! FYI, It doesn’t have enough limbs to be what they say.)

While I don’t like cliff hangers, I also don’t like this way of working either! The next story is already started in this book, we know what it’s going to be about. That’s not the problem though, the problem is that it makes you want to keep going – very clever – except I have a nice paperback set going on here. The paperback of Ghosrtly Echoes isn’t available yet! It’s not even listed on amazon as a pre-order for some reason.

These books seem to be aimed at a slightly lower age group than me, which is something I Can deal with, but I’d love to read something by William Ritter in this style with a more complex storyline. I think that would be thoroughly epic.