Top Ten Tuesday is a weekly feature hosted by The Broke and the Bookish that other bloggers are welcome to join in, to create Top Ten lists on varying topics. This week it’s Top Ten Holiday Gift Guide Freebie.

1 For Those Looking For the Next Dexter

I haven’t actually read Dexter yet, it’s on my list, but I’ve seen some of the series and this has a similar feel to it. The MC doesn’t want to hurt people, but she really wants to hurt people. She figures the bad people are a good choice…

2 For Fans of Re-Tellings 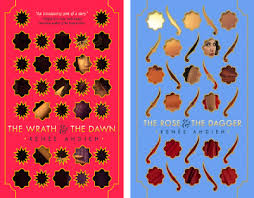 A re-imagining of Arabian Nights, this was one of may favourite series this year. It broke more stereotypes than it conformed to and I loved the whole affair.

3 For Those Seeking An Epic Adventure

I’ve found this fantasy series pretty involved and nice and meaty. It’s suitable for an audience that’s not so into the heavy romance ‘sub-plot’ these stories often have. It’s not quite finished yet, but it’s close!

The Forgetting by Sharon Cameron

I haven’t actually quite finished this story yet, but I’m pretty convinced I will be recommending it when it’s done. So far, it’s been pretty interesting and while romance is a factor, there’s been nothing too stupid going on which I like.

5 For Those After A…Less Romance-y Vampire Story

The Coldest Girl in Coldtown by Holly Black

If you’re after something between Dracula and Twilight then this is the book you’re after. It’s dark but at the same time it’s also adorable and I need to re-read this with a blanket and some hot-chocolate soon.

6 For Those Looking To Buy Their First Graphic Novel

7 For Fans of Historical Fantasy Novels

The Diviners by Libba Bray

This is a really well done historical fantasy. Both elements are blended together perfectly and it’s full of atmosphere and suspense!

8 For Those Looking For The Next Apocalypse

Such a clever book, I loved all the characters and it was interesting to see how the end of the world effected them all differently.

9 For Fans of Dr Who

Jackaby is such a quirky and un-intentionally funny character that you can’t help but compare him to Dr Who. I’d definitely recommend this to all teens.

10 For Fans of Fairytales

Best fairytale retelling type book I’ve read in ages. It had all the classic fairytale atmosphere but with a new and exciting concept. And just look at that cover. Just gorgeous.