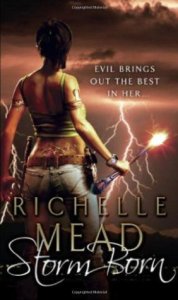 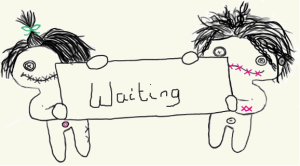 “Waiting On” Wednesday is a weekly event, hosted by Jill at Breaking the Spine, that spotlights upcoming releases that we’re eagerly anticipating.

Just typical. No love life to speak of for months, then all at once, every creature in the Otherworld wants to get in your pants…

Eugenie Markham is a powerful shaman who does a brisk trade banishing spirits and fey who cross into the mortal world. Mercenary, yes, but a girl’s got to eat. Her most recent case, however, is enough to ruin her appetite. Hired to find a teenager who has been taken to the Otherworld, Eugenie comes face to face with a startling prophecy–one that uncovers dark secrets about her past and claims that Eugenie’s first-born will threaten the future of the world as she knows it.

Now Eugenie is a hot target for every ambitious demon and Otherworldy ne’er-do-well, and the ones who don’t want to knock her up want her dead. Eugenie handles a Glock as smoothly as she wields a wand, but she needs some formidable allies for a job like this. She finds them in Dorian, a seductive fairy king with a taste for bondage, and Kiyo, a gorgeous shape-shifter who redefines animal attraction. But with enemies growing bolder and time running out, Eugenie realizes that the greatest danger is yet to come, and it lies in the dark powers that are stirring to life within her…

I ordered this one from amazon after finding Iron Crowned (book 3 of Dark Swan) at the book fair in October and since then I found both Thorn Queen (Book 2) and Shadow Heir (Book 4) in a charity shop, so now I’m desperate for Storm Born to arrive so I can get stuck into this urban fantasy series by Richelle Mead!

Why is the post so slow??? Have you read this series? What did you think?

What have you been waiting for this week?