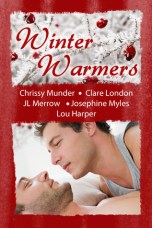 “Well in that case I’ll have a pint of…Santa’s Butt?”
“And a bottle of Rudolphs Revenge.”

Mulled wine. Butterscotch kisses. Hideous sweaters. Candy at the beach, or a trip to a sex shop in Amsterdam. And the man of your dreams, wrapped around you… Winter warmers come in many shapes and sizes, from the tongue-in-cheek to the hot-as-hell. Enjoy a quintet of heart-warming tales of men loving men from Clare London, Chrissy Munder, JL Merrow, Josephine Myles, and Lou Harper that are guaranteed to leave you with a smile on your face.

One thing’s for sure—it’s going to be a red-hot Christmas!

Andy Jackson always knew that class 2C’s help in preparing for the annual Christmas Fair would be a mixed blessing. Then he’s paired up on the Lucky Dip with Greg, the man who dumped him but now can’t keep away, the pupils are either lecturing him on his lovelife or losing bladder control, and no one’s fixed the broken handle on the storage room. It may all be one whoopee cushion too far for him.

I thought this was an interesting story to start with. It’s a story about second chance love which is lovely except that Andy was surprisingly forgiving and I don’t really remember them having much chemistry to be honest with you. It also felt like Andy was much younger, sort of like a student teacher to Greg’s older status. I’m not sure we found out their ages but I don’t think Greg was a teacher.

Matthew Morrison is determined to conquer his fear of heights and achieve a winning outcome. At least, that’s what the best-selling, self-help book he’s listening to promises. Being stuck on a three-story tower in the middle of a snowstorm wasn’t part of the plan. With no St. Bernard in sight, it’s Cute Ticket Guy Adam to the rescue, and an outcome Matthew never anticipated.

This was my favourite one. I thought that these guys had fantastic chemistry and they were adorable. I’l have liked this story to be much longer! I hope they make each other happy for a long time. Adams hats sound spectacular and I just want to make them all (except maybe the monkey.)

May meets December when Jem and Oscar chance on each other at the Santa Monica Pier, only weeks before Christmas. The two men are separated by age, social status, and their taste in candy, yet if they are both naughty and nice, they might just find holiday cheer together.

This was both cute and weird at the same time. Jem misunderstands things but then Oscar didn’t explain – luckily Jem gave Oscar just enough information so that he could track him down and make it all better…

When in Amsterdam…
by Josephine Myles

Brandon is on his first visit to new boyfriend Jos’s home country, just in time for their Sinterklaas celebrations. But an unexpected detour into a sex shop leads Brandon to new discoveries about himself, and a whole new dynamic to their relationship. The weather may be cold and damp, but Brandon and Jos soon heat things up!

This was my least favourite I think. Probably because Brandon changed his mind so quickly at the very end. And I’m not talking about his steamy relationship with Jos – this is the most detailed of the stories.

A Pint of Beer, a Bag of Chips, and Thou
by JL Merrow

What’s the best gift a young man could get for Christmas? Mohawked saxophonist Liam wouldn’t have picked the hideous collection of knitwear he’s presented with by his mum and his aunties. He’d rather have the gorgeous older man he sees every day while busking at King’s Cross. But with a little Christmas magic in the air, maybe those garish garments are just the thing for attracting a silver fox…

Possibly my second favourite, this was kooky and comfy. Or was that Liam’s outfit?! This one has a feel to it that makes it seem like it’s set in the past – I have no idea why! But it’s all warm and cuddly and a nice story to end on.