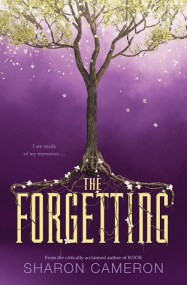 “Nadia. Eyes on my eyes and try to understand. You like him. You talk to him. He climbs things. And he makes you glass the colour of your eyes. Of. Your. Eyes. Nadia. Do not be such a zopa.”
-Page 167

What isn’t written, isn’t remembered. Even your crimes.

Nadia lives in the city of Canaan, where life is safe and structured, hemmed in by white stone walls and no memory of what came before. But every twelve years the city descends into the bloody chaos of the Forgetting, a day of no remorse, when each person’s memories – of parents, children, love, life, and self – are lost. Unless they have been written.

In Canaan, your book is your truth and your identity, and Nadia knows exactly who hasn’t written the truth. Because Nadia is the only person in Canaan who has never forgotten.

But when Nadia begins to use her memories to solve the mysteries of Canaan, she discovers truths about herself and Gray, the handsome glassblower, that will change her world forever. As the anarchy of the Forgetting approaches, Nadia and Gray must stop an unseen enemy that threatens both their city and their own existence – before the people can forget the truth. And before Gray can forget her.

The blurb of this book put me in mind of Aeon Flux and despite it’s bad rep, I really enjoyed the film and I think it was this comparison (And the pretty cover) that truly made me buy it. But mostly the cover… Reading it however, didn’t really call to mind the film at all, it’s only looking back that there’s one vague, barely there similarity which is most likely a coincidence.

I’m not sure what made me desperate to read it but I’m so glad I picked it up sooner rather than later, though I was having a bad time with ‘big books’ towards the end of last year and I ended up putting this down for over a month, which I’m annoyed about as it always damages how I feel about it in the end. But luckily I managed to hold onto most of what this book gave me.

You know how sometimes you just know you’re going to like a book? But you’re scared that you won’t so you try not to be convinced and you love it anyway? This was one of those books for me. I was all ready to dislike Gray from Nadia’s descriptions of him to start with, but when we actually met him and learnt about him it was easy to forgive him everything. Plus, the chemistry they had was fantastic! Not just physically but their friendship too just worked so well.

Nadia’s character fascinated me. She was partly the typical dytopian odd ball, doesn’t look in the mirror, doesn’t make friends, doesn’t fit in type but at the same time she really wasn’t. She had a reason for everything and I identified with her quite well. She was mostly logical and observant and generally in the background just getting on with being herself.
I also wonder if she was slightly autistic and the reason I thought this is the way that her 2 most successful relationships are set out. The way her younger sister gets her to focus, pay attention and understand plus she often explains things to her, and they way that Gray draws her out, by giving her boundaries that she can control and a promise to back off when she needs him to. Perhaps she wasn’t written with the label in mind but I can see the elements and really this makes me so happy because it’s the ones like Nadia who are misunderstood the most and the fact she had these two was simply amazing. I like Genivee and Gray all the more for this.
And then when push comes to shove, Nadia very practically saves the day.

This world is quite fascinating too, but the book is mostly focused on the people which makes sense because, because of the forgetting the people are all fascinating and they never go outside the city. While I am curious about the world, I don’t think that another book in this world would work or is needed, I’m actually pretty pleased with the wrap up of this story.
I’d love to read it again sometime without the big pause in the middle and see how it sits then.

There was one character in this book that I felt horrendously sorry for and I’m pleased they got a chance at the end and there was another character I was surprised chose no at the end, considering the problems they were having. But hey, that was their choice I guess and they can change their mind if they ever want to.

Are you considering reading this book? I think you should!