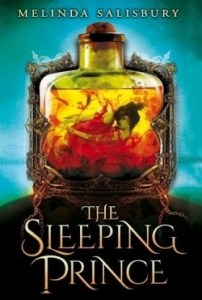 Return to the darkly beautiful world of The Sin Eater’s Daughter with a sequel that will leave you awed, terrified . . . and desperate for more.

Ever since her brother Lief disappeared, Errin’s life has gone from bad to worse. Not only must she care for her sick mother, she has to scrape together rent money by selling illegal herbal cures. But none of that compares to the threat of the vengeful Sleeping Prince whom the Queen just awoke from his enchanted sleep.

When her village is evacuated as part of the war against the Sleeping Prince, Errin is left desperate and homeless. The only person she can turn to is the mysterious Silas, a young man who buys deadly poisons from Errin, but won’t reveal why he needs them. Silas promises to help her, but when he vanishes, Errin must journey across a kingdom on the brink of war to seek another way to save her mother and herself. But what she finds shatters everything she believed about her world, and with the Sleeping Prince drawing nearer, Errin must make a heartbreaking choice that could affect the whole kingdom.

This is the sequel to one of my favourite books of 2015. I absolutely adored The Sin Eater’s Daughter and couldn’t wait to pick up The Sleeping Prince as soon as it came out. Unfortunately I didn’t get round to reading it, I think I got a case of ‘Cold Feet’ and the ‘What If’s’. What if it wasn’t as good as The Sin Eater’s Daughter, what if I’d over-hyped it, what if I didn’t like where this story went? But I really shouldn’t have worried. Within the first few pages I knew this was going to be as good, if not better than it’s predecessor.

The Sleeping Prince introduces us to a completely different set of characters. There is a new evil, power hungry villain in the shape of The Sleeping Prince, who has awoken from a centuries long enchanted sleep only to seek revenge on any descendents of his imprisoners.

We no longer see everything from Twylla’s point of view but from Errin’s. Errin is Lief’s sister, the one he left behind. Errin is struggling to survive in a village run by criminals. Her mother is sick and she has no money. But she has Silas. Silas is a stranger who hides inside a hooded cape. She’s never seen his face but he always seems to be around when she needs him. Since the Sleeping Prince awoke the whole country has had to come to terms with the fact that monsters exist, and fairytales are real! And Errin soon learns that her role in these fairytales is more important than she ever imagined.

The Sleeping Prince is a lot darker and a lot nastier than The Sin Eater’s Daughter. There are plenty of action scenes but also plenty of slow romantic moments that balance each other out nicely. I really liked Errin as a main character, and think I actually preferred her to Twylla because she was less gullible, although, like Twylla, she also didn’t ask as many questions as I would have liked. I enjoyed learning all the secrets and truths behind the fairytales and how they had become twisted overtime. I have to say though, while I found parts of this story really predictable, I did NOT see that ending coming. Melinda Salisbury has a nack of pulling something special out of the bag and really turning everything on it’s head. Well done, is all I can say, well done!

So while, for the most part, I was looking at a 4 star rating for this book, I ended up give it my first 5 star rating of 2017, because it blow my mind. I can not wait to read the final instalment of this trilogy, and I’m so glad I only have to wait till March for it! The Scarecrow Queen is out on the 2nd of March (in the UK)! Until then I think I might read The King of Rats which is a short prequel. You can find it exclusively with Waterstones as a pdf download – Link HERE. enjoy!