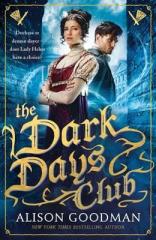 “It is very beautiful.”
“Beautiful, indeed. But like so much in this world, it’s true worth is hidden inside.”
-Page 174

London, April 1812. Eighteen-year-old Lady Helen Wrexhall is on the eve of her debut presentation to the Queen. Her life should be about gowns and dancing, and securing a suitable marriage. Instead, when one of her family’s housemaids goes missing, Lady Helen is drawn to the shadows of Regency London.

There, she finds William, the Earl of Carlston. He has noticed the disappearance, too, and is one of the few who can stop the perpetrators: a cabal of powerful demons that has infiltrated every level of society. But Lady Helen’s curiosity is the last thing Carlston wants—especially when he sees the searching intelligence behind her fluttering fan. Should Helen trust a man whose reputation is almost as black as his lingering eyes? And will her headstrong sense of justice lead them both into a death trap?

In The Dark Days Club, internationally best-selling author Alison Goodman introduces readers to a heroine who is just as remarkable as Eona—and yet again reinvents an establlished literary genre, making it her own.

I really enjoyed this book and I’ve spent days since I read it thinking about the world and wanting to know what happens next so it got something right!

The premise had me thinking of The Parasol Protectorate so I had high expectations. It wasn’t really like The Parasol Protectorate in that Lady Helen had far less freedom and this story deals with something quite different.
Her parents have been dead since she was little and her mother was accused of treason so Lady Helen is expected to distance herself from the woman she barely remembers by her aunt and uncle. But as her presentation to the Queen comes around and she holds her own ball, the truth of her mother is revealed to her and it’s something new! Which was quite refreshing.

There were different layers to the story and it looks like it’s going to be a pretty good series! There was the balls and marriage side to the whole thing and there was also the supernatural side. And poor Lady Helen was suffering attacks from all sides. Helen was an interesting character. She’s strong and smart in a time where women were meant to be biddable and quiet. She struggles so hard to live up to the expectations of her family despite what she actually is, but obviously in the end she doesn’t quite make it – or there wouldn’t be a second book!

Navigating this world with her was fascinating. She wasn’t particularly annoying about things and she rarely took the easy route – she played the game well. She knew where all the lines were and she went right up to them, only going over when no one was looking. I look forward to following her into the next stage of her life.

Her brother was a bit of an idiot to be honest with you. We didn’t see much of him and I kind of hope he gets pulled into book 2 more.
There was a sort of love triangle in here too, made more cliche because it was either sides of her life. I’m not impressed with one of these guys and if you’ve read this book, you should be able to know which one!

The next book comes out so vary soon and I’m going to be reading it in February, which will tick off a RED book in our cover colour challenge!