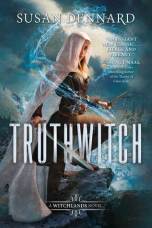 “If you think I’m so powerful…then you’re mistaken. I know truth from lie, but that’s it. And even if when I know the truth…that doesn’t mean I always tell it.”
-Page 395

In a continent on the edge of war, two witches hold its fate in their hands.

Young witches Safiya and Iseult have a habit of finding trouble. After clashing with a powerful Guildmaster and his ruthless Bloodwitch bodyguard, the friends are forced to flee their home.

Safi must avoid capture at all costs as she’s a rare Truthwitch, able to discern truth from lies. Many would kill for her magic, so Safi must keep it hidden – lest she be used in the struggle between empires. And Iseult’s true powers are hidden even from herself.

In a chance encounter at Court, Safi meets Prince Merik and makes him a reluctant ally. However, his help may not slow down the Bloodwitch now hot on the girls’ heels. All Safi and Iseult want is their freedom, but danger lies ahead. With war coming, treaties breaking and a magical contagion sweeping the land, the friends will have to fight emperors and mercenaries alike. For some will stop at nothing to get their hands on a Truthwitch.

Original review can be found HERE.

I’ve also previously read an extended sneak peek of this book – the first 15 chapters / 164 pages / 39%. My First Impressions Friday post about it can be found HERE.

I’ve re-read this in prep for reading Windwitch. I requested a sneak peek from netgalley and was lucky enough to get it! however I didn’t remember as much of this as I thought so I stopped pretty quickly. I’ll be going off to read it once I’ve finished this post however…

I knew I’d need to re-read this story as it has so many different layers! I’d forgotten just how many to be honest with you.

I had decided to stick to plan A (collect then read the series) but then the sneak peek was on netgalley and I just clicked it…and here we are! So, plan B it is…

All these characters have such room for growth and I hope it’s good growth. After my adventures in the Grisha world I realise it could go any way (please don’t). I’m pretty sure every revelation I had while reading this were ones I had the last time too.

There swear there was another element to Safi’s power. I must be getting her confused with someone else but I really can’t work out who.

Tune in tomorrow for my First Impression Friday of Windwitch!