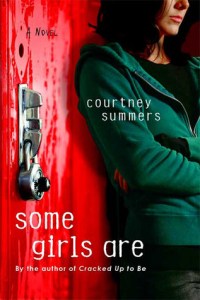 Climbing to the top of the social ladder is hard—falling from it is even harder.  Regina Afton used to be a member of the Fearsome Fivesome, an all-girl clique both feared and revered by the students at Hallowell High… until vicious rumors about her—and her best friend’s boyfriend—start going around.  Now Regina’s been frozen out, and her ex-best friends are out for revenge.  If Regina were guilty, it would be one thing, but the rumors are far from the terrifying truth, and the bullying is getting more intense by the day.  She takes solace in the company of Michael Hayden, a misfit with a tragic past whom she herself used to bully.  Friendship doesn’t come easily for these onetime enemies, and as Regina works hard to make amends for her past, she realizes Michael could be more than just a friend…if threats from the Fearsome Foursome don’t break them both first.

Tensions grow and the abuse worsens, as the final days of senior year march toward an explosive conclusion in this dark new tale from the author of Cracked Up To Be.

I’m starting to realise that there are some authors who can take even the darkest parts of real life and somehow create something spectacular. Courtney Summers is one of those authors. It’s been a while since I read her debut, Cracked Up To Be but I remember being fascinated and repulsed by the story. It tackled some very disturbing ideas and really made you think about high school life. I’m so glad my high school experience wasn’t anything like Parker’s from Cracked Up To Be or Regina’s from Some Girls Are! I don’t think I would have handled it any where near as well as these two did. Some Girls are is definitely one disturbing and emotion read.

When I read Cracked Up To Be, I remember being in awe with how Courtney Summers took a character like Parker Fadley, who was so self absorbed that she was almost completely unlikeable, and somehow made me care about her. She’s managed to do the same with Regina Afton in this book. Unlike Parker, Regina Afton was a lot easier to feel sorry for straight away but with every new admission it definitely got harder to see her as a victim. That said, even a bully doesn’t deserve what Regina was put through and I wanted to claw out the eyes of the girls who made a joke out of it. Everyone deserves the chance to redeem themselves and that’s what made this book so readable, you just want to see Regina take this opportunity to become something more.

Some Girls Are explores friendship, the mean side of girl friendship groups and high school, and the importance of being true to ones self. I loved how this story made me feel things. It takes a lot to make that kind of emotional connection possible especially in such a short story but Courtney Summers made that happen.

For me the ending was a little bit disappointing because it didn’t resolve as well as I would have liked. It left me with a bit of a hollow feeling which I don’t seem to be able to shake off but apart from that, I really loved this story. I enjoyed the new relationships that developed and found everything else, including the characters, to be very believable and realistic.

I think I can conclude that Courtney Summers is becoming one of my favourite Contemporary YA writers and I definitely want to read more of her work.