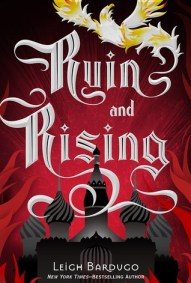 “What are you two doing barefoot and half naked in the mud? Looking for truffles, I hope?”
- Page 101

The capital has fallen.
The Darkling rules Ravka from his shadow throne.
Now the nation’s fate rests with a broken Sun Summoner, a disgraced tracker, and the shattered remnants of a once-great magical army.
Deep in an ancient network of tunnels and caverns, a weakened Alina must submit to the dubious protection of the Apparat and the zealots who worship her as a Saint. Yet her plans lie elsewhere, with the hunt for the elusive firebird and the hope that an outlaw prince still survives.
Alina will have to forge new alliances and put aside old rivalries as she and Mal race to find the last of Morozova’s amplifiers. But as she begins to unravel the Darkling’s secrets, she reveals a past that will forever alter her understanding of the bond they share and the power she wields. The firebird is the one thing that stands between Ravka and destruction—and claiming it could cost Alina the very future she’s fighting for.

At this point I’m betting you’ve read books one and two. If not, the heck you doing here?! Go away! There’ll be spoilers all over!

I’ve been hating on Mal for most of this series because a) he didn’t notice Alina b) he wasn’t the Darkling. Then I found out the Darkling was the bad guy and I was angry at this whole world and I hated Mal for being stupid about everything. But I thought about it and I realised that Mal was being stupid because he was insecure. I think this held him back more than he realised. He wasn’t an all powerful Grisha and he wasn’t a charming prince. So I tried to cut him some slack even if he was going on about “You deserve better!” – it’s her choice bozo.
Especially as a) was incorrect.

This felt a little anti-climactic in the end. I’m not sure if it’s because I had to check the ending so that I could go to bed on time without reading to the end of the book or if it’s because I’ve struggled with this world since I found out the Darkling was bad. It crushed all my dreams! Even if I’m not quite sure what they were since they were cut short – I saw a picture of the Darkling’s candle in a villians box and it kind of gave the game away.

The ending was a little sad. Especially with so few knowing the full story. I hope Alina wrote it down so it can be kept safe. The After was cute though and I wonder if any of these characters will be featured in the next books. Only one way to find out, of course.

Even with my new resolve regarding Mal, Nikolai was still my favourite. He had the best lines and I think that I’d quite happily be charmed by him.

I think I’d like to try re-reading them some time, when I’ve forgotten most of the plot and see if I feel better about them. Usually this is the kind of story I’d read obsessively and I know I keep mentioning it but I do wonder if the finding out about the Darkling prematurely affected this.
I was concerned that after reading these I wouldn’t want to move onto Six of Crows, but I’m actually looking forward to it! It’s all new territory!
Except for Joost and the problems he’s having with the moonlight and his moustache…