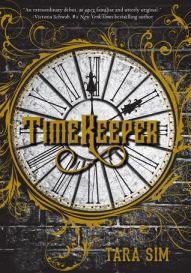 In an alternate Victorian world controlled by clock towers, a damaged clock can fracture time—and a destroyed one can stop it completely.

It’s a truth that seventeen-year-old clock mechanic Danny Hart knows all too well; his father has been trapped in a Stopped town east of London for three years. Though Danny is a prodigy who can repair not only clockwork, but the very fabric of time, his fixation with staging a rescue is quickly becoming a concern to his superiors.

And so they assign him to Enfield, a town where the tower seems to be forever plagued with problems. Danny’s new apprentice both annoys and intrigues him, and though the boy is eager to work, he maintains a secretive distance. Danny soon discovers why: he is the tower’s clock spirit, a mythical being that oversees Enfield’s time. Though the boys are drawn together by their loneliness, Danny knows falling in love with a clock spirit is forbidden, and means risking everything he’s fought to achieve.

But when a series of bombings at nearby towers threaten to Stop more cities, Danny must race to prevent Enfield from becoming the next target or he’ll not only lose his father, but the boy he loves, forever.

I liked Colton and how he was a a mix of timeless clock spirit and curious child – he knew things from watching the people around his tower but he didn’t know everything and he didn’t understand the why of much the humans did. This was nice because often ageless beings know everything or nothing. That’s not to say that I don’t like these types of beings – I do, they can both be terribly amusing, but this was just different. Poor guy has a bad time of it and I’m so pleased than Danny was sent to look after him.

Danny isn’t always sensible and some of his choices had me on edge through much of his adventures. But I think he’s onto many things right now and I can’t wait to find out what they’re all going to be. I also liked that he was suffering from PTSD (not that HE was suffering from it, but that a character was). I don’t know much about it at all, so I hope it’s written well because often inaccurate representation is worse than no representation at all.
He’s a pretty focused character but he starts to get distracted and he sort of beats himself up about it. I wonder though if he realises how good the distraction was for him?

Throughout the book there are fragments of the legend of where the clock towers came from. It’s a little distracting but it’s not every other chapter and I’m pretty sure they’re going to be quite important so you better pay attention! Of course, they’re only one theory but since they’re in the book the way they are I’m guessing they’re the right theory?

I liked this re-imagined Victorian London and I’m looking forward to book two later on this year (I hope.) This has the feel of a trilogy to it and if it’s going to be more than a duology then I really hope it avoids all the book 2 traps (love triangles, break ups, long distance etc) and I hope they work together to solve the problems they’re no doubt going to find! I’d like Danny to make some new friends too. I want to see how they interact with this other part of their world.

Despite loving this book, I struggled to write this review – don’t leave nearly a month before writing reviews even if you’re busy, that’s just silly!…